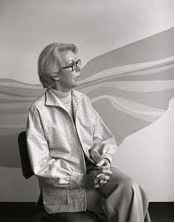 “My work has been concerned, in varying modes of pictorial structure and various degrees of representation and abstraction, with the effort to embody, and to evoke, sates of mind, moods and emotions.” H.L.

Helen Lundeberg was born in Chicago and moved to Pasadena, California, with her family in 1912. She was a gifted child and as a young adult was inclined to become a writer. However, after taking an art class taught by Lorser Feitelson at the Stickney Memorial School of Art in Pasadena, Lundeberg was inspired to pursue a career as an artist. Along with Lorser Feitelson in 1934, Lundeberg founded Subjective Classicism, better known as Post Surrealism.

Unlike European Surrealism, Post Surrealism did not rely on random dream imagery. Instead, carefully planned subjects were used to guide the viewer through the painting, gradually revealing a deeper meaning. This method of working appealed to Lundeberg’s highly intellectual sensibilities. Themes of Post Surrealism continued in Lundeberg’s paintings until the 1950s, when she began to explore geometric abstraction.


view all works by Helen Lundeberg