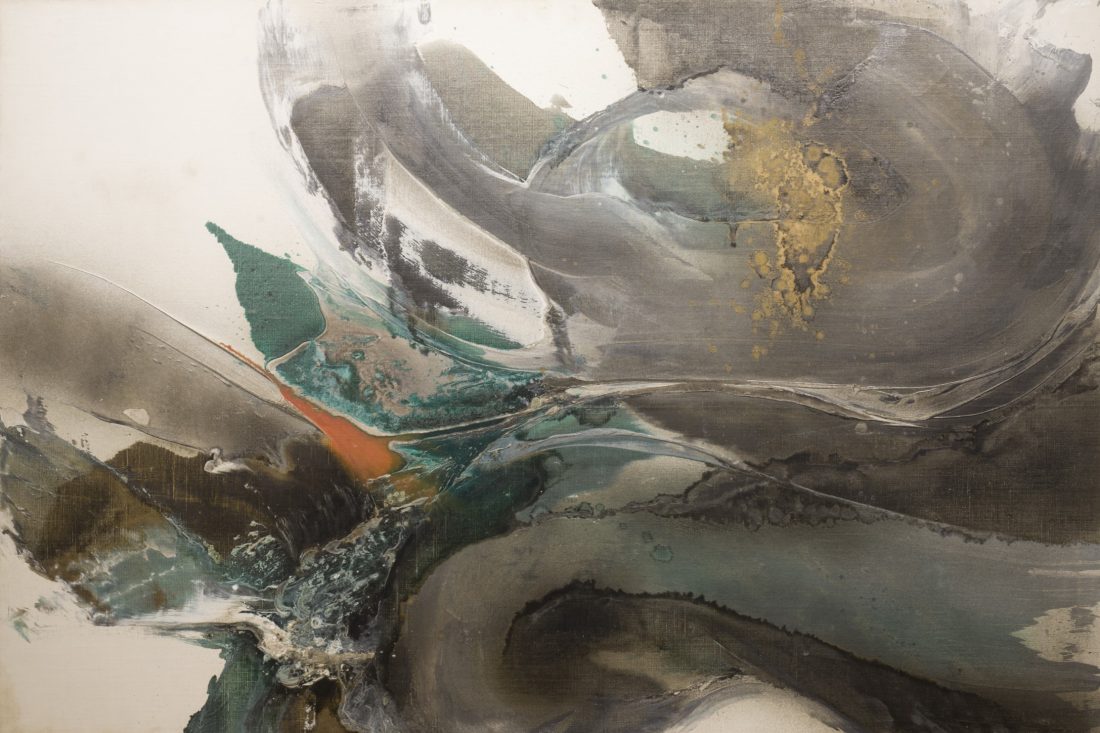 Masatoyo Kishi
Painter, printmaker, and sculptor Masatoyo Kishi - best known for mixing elements of traditional Japanese culture with Western abstraction - was born in Sakai, Japan, on March 11, 1924. He graduated with degrees in physics and mathematics from the Tokyo University of Science in 1953.

"As a Japanese artist in the 1950s in Tokyo, I didn't go to art school," said Kishi. "Japanese artists studied literature, economics, science; then you explored art."
After graduating, he pursued a short career as a mathematics teacher before he began exhibiting with Tekkei Kai, a group of abstract painters associated with the Kyoto Museum of Art.

From the late 1950s to the 1960s, he created his Opus paintings, which feature softly dripped pigments and sweeping brushwork. Using large brushes, Kishi painted his works by laying canvases horizontally and using wooden sticks to drip paint onto them.

"The paint brush is a difficult extension for me," Kishi explained. "What develops from this method is an orderly conversation between me and the canvas. I respond to each change taking place.”
In 1960, Kishi moved from Japan to San Francisco, where he lived until 1988. exhibited throughout the Bay Area and the U.S. and taught at Holy Names College in Oakland and the Dominican College in San Rafael.

Beginning in the 1970s Kishi's focus switched to sculpture, and by the mid '70s he was working almost exclusively in the three dimensional medium. In 1998, he relocated to Grass Valley, California, where he lived and worked until his death in 2017.


“Kishi’s paintings inspire a sense of chaos and awe,” said Jessica Phillips, director of Hackett Mill. “To look at a Kishi painting is to accept a challenge of sorts, one where you find yourself completely immersed in the rhythm of the paint as you try to trace the artist's hand not to learn how or why he painted in this way but rather to gain access to the lyrical complexity that resulted from it.”


view all works by Masatoyo Kishi