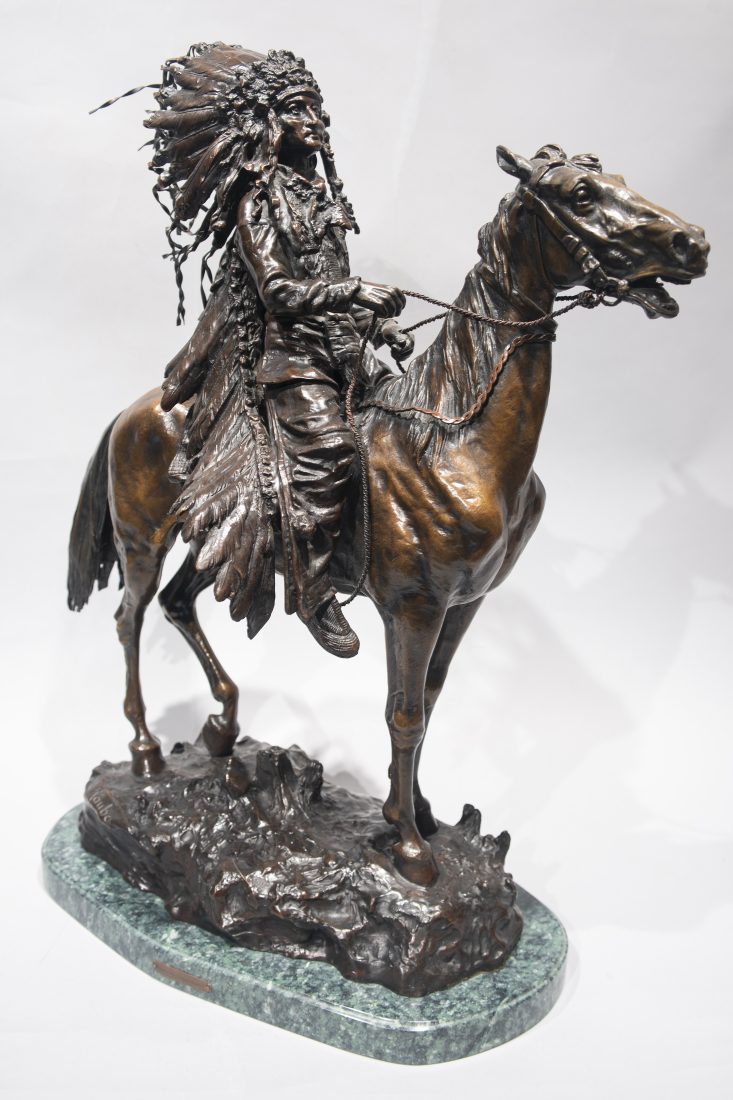 Carl Kauba
This Austrian sculptor was born in Vienna in 1865. His teachers were Karl Waschmann (1848-1905), known for his ivory sculptures and portrait plaquettes of contemporary celebrities, and Stefan Schwartz (1851-1924), who exhibited in Paris, including the Exposition Universelle of 1900 where he won a gold medal. Kauba's intricate bronzes, imported to the United States between 1895 and 1912, were cast at the Roman Bronze Works. Kauba was part of the nineteenth-century tradition of polychrome bronze sculpture. There were several types of patinas on a single statue: he could render the color of buckskin, variously tinted shirts, blankets, feathers, as well as beaded moccasins. Reportedly, Kauba came to America around 1886. Inspired by the Western tales of German author Karl May, he traveled to the West and made sketches and models. Critics, however, pointed out inaccuracies of costume and other details. For instance, the guns that his "mid-nineteenth-century" figures use are models produced after 1898. Apparently he did all of his works back in Vienna.
Besides the variety of color, Kauba's bronzes show a great range of textures and his style is highly naturalistic. The sculptor loved ornament, some of which he rendered with coiled wire for reins, rope and feathers in headdresses. He successfully rendered figures in motion and often executed compositions with more than one figure. Berman (1974) illustrates non-Western subjects by Kaula, such as the pendants Where? and There (ca. 1910), a seated Scottish couple, impressive in the expressions and the details on patterned fabrics of both sitters. Another genre piece is Buster Brown, ca. 1910, and Nude on Vase shows Kauba's versatility even further. The smooth skin contrasts with the stylistic, plant-like vase.


view all works by Carl Kauba