American artist Daniel LaRue Johnson, best known for his large-scale public sculptures, including the fifty-foot stainless-steel monolith Peace Form One, which was erected across the street from the United Nations headquarters in Manhattan in 1980, has died, Pac Pobric and Sarah P. Hanson of the Art Newspaper report.

Born in Los Angeles in 1938, the painter, sculptor, and printmaker studied at the Chouinard Art Institute (now the California Institute of the Arts) in the early 1960s. In 1964, Johnson was invited by John Weber to participate in “Boxes,” an exhibition at Dwan Gallery. In the show, he presented works from his “Black Box” series, assemblages of objects painted black that addressed America’s civil rights movement. One such work, titled Yesterday, an open-faced box containing a section of the American flag besides a headless doll, comments on the Sixteenth Street Baptist Church Bombing in Birmingham, Alabama. After graduating in 1965, Johnson received a John Simon Guggenheim Memorial Foundation fellowship, which allowed him and his wife, artist Virginia Jaramillo, to live in Paris, where he studied with Swiss sculptor Alberto Giacometti, before settling in New York.

The artist’s return to the US coincided with a shift in the focus of his work. Johnson began creating colorful abstract paintings and Minimalist steel sculptures. He also worked on a series of public commissions, including Peace Form One, which commemorates Ralph Johnson Bunche, the first African American to win the Nobel Peace Prize in 1950. Previously, Johnson created the largest Corten steel sculpture in the world. Dedicated to Martin Luther King Jr., the work was installed in a park in Minneapolis, Minnesota, in 1970.

In 1971, Johnson withdrew his work from the Whitney Museum’s show “Contemporary Black Artists in America,” in solidarity with the Black Emergency Cultural Coalition, the group of African American artists who initiated the exhibition. The boycotting artists claimed that the institution reneged on its promise to consult with African American arts specialists before selecting works for the show and to stage it during “the most prestigious period of the 1970–71 season.”

Johnson is represented by Peyton Wright Gallery in Santa Fe and Vincent Vallarino of Vallarino Fine Art in New York. “It has been an honor for us to handle Johnson’s work and we are grateful for the opportunity to help introduce this pioneering African American artist to new audiences,” dealer John Wright Schaefer said in a statement. Johnson’s work is currently featured in Tate Modern’s show “Soul of a Nation: Art in the Age of Black Power,” which runs through October 2017. 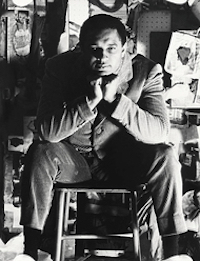