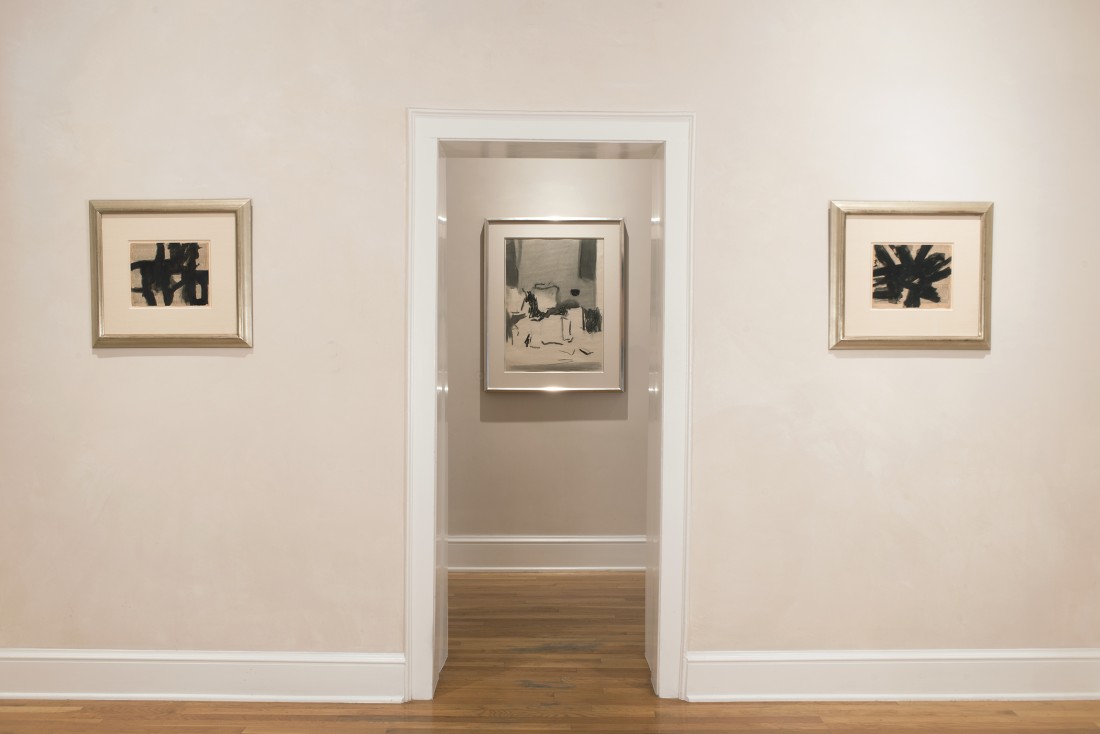 Under Glass: Master Works on Paper

An exhibition of works on paper by some of the gallery’s most distinguished artists, including Joan Miró, Franz Kline, Hans Hofmann, Helen Frankenthaler, Joan Mitchell, Diego Rivera, Stanton Macdonald-Wright, Herbert Bayer, Robert Mapplethorpe, and others. 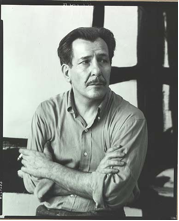 Franz Kline’s first academic training was at Boston University from 1931 to 1935 and in London at the Heatherley School of Art from 1937 to 1938 as an illustrator and draughtsman. Two main tendencies emerged at an early stage that would later develop into a powerful contribution to the ‘gestural’ trend within Abstract Expressionism.

Numerous small graphics, sketches and oils and the mural series Hot Jazz (Norfolk, VA, Chrysler Mus.), painted for a New York bar in 1940, reveal an interest in translating animated subjects into quick, rudimentary strokes. Franz Kline admired and found inspiration in a wide range of artists notable for their fluency in handling paint, including Rembrandt, Goya, Manet, Sargent and Whistler.
By contrast, an inclination to compose in terms of simplified areas was derived from academic training and perhaps also reflected Kline’s memories of his native Pennsylvania’s coal-mining region, with its stark scenery, locomotives and similar massive mechanical shapes to which the titles of his later abstract images sometimes referred. Nijinsky as Petrouchka and similar canvases marked the climax of this representational phase with their combination of vigorous brushwork and an angular substructure. But against the context of contemporary New York painting a move towards abstraction was inevitable. 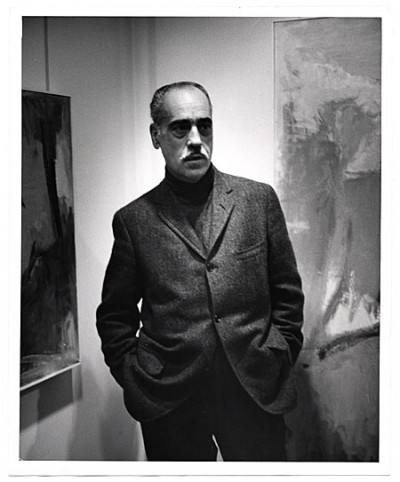 Known for his Abstract Expressionism and Color-Field paintings in oil as well as collages, Esteban Vicente attended art school in Madrid at the Academy Belles Artes before moving to New York City in 1936. There he became affiliated with the Action Painters in the 1950s including Willem and Elaine De Kooning. In "Art News" magazine, 1952, Elaine De Kooning had an article published on Esteban Vicente titled "Vicente Paints a Collage"

He had his first one-man show at the Ateneo de Madrid in 1928, and from that time entered many exhibitions in Spain including Barcelona as well as Madrid where his paintings are in the Reina Sofia Museum. In 1991 Vicente was honored by King Juan Carlos I and Queen Sofia of Spain with the Gold Medal for Fine Arts.

Of his painting Esteban Vicente said: ...If I have to say something about the subject of my painting, I might say that it is an interior landscape. This image becomes the subject. It is always the same idea, the same image---from an accumulation of experience. I don't know if one can actually identify this image. When I say 'landscape', I mean a structure. The structure of the painting is landscape---but not the color. That's why I say they are 'inter landscapes'. " (Herskovic 346) 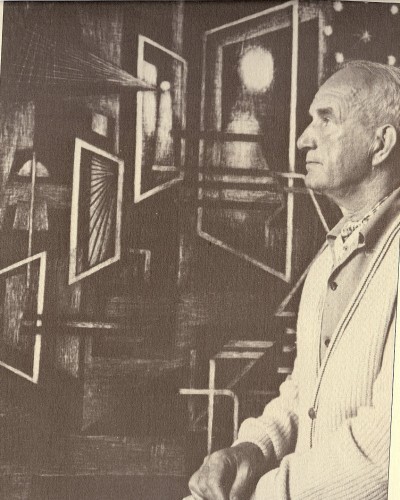 Hungarian-born Emil James Bisttram achieved early success as an artist, studying and teaching at several prominent art schools, including the New York School of Fine and Applied Arts, Parson’s, and the Master Institute of the Roerich Museum. In 1931, Bisttram was awarded a Guggenheim fellowship which allowed him to travel to Mexico to study mural painting with Diego Rivera. In 1934, he was commissioned to paint murals for the Works Progress Administration (W.P.A.).

Bisttram founded the Taos School of Art as well as the first commercial gallery in Taos. Together with Raymond Johnson and others, Bisttram started the Transcendental Painting Group in Santa Fe in 1938. He was very active in fostering the growth of the arts in New Mexico up until his death at 81. 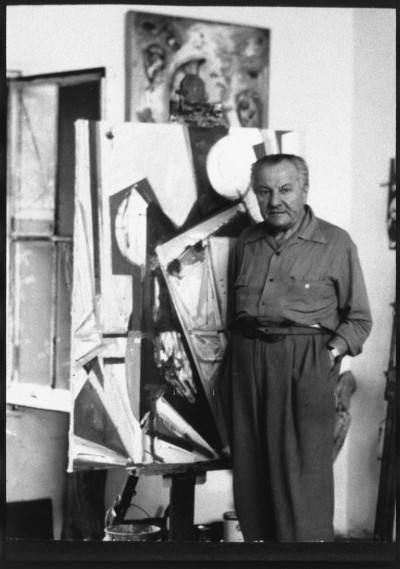 Hans Hofmann is one of the most important figures of postwar American art. Celebrated for his exuberant, color-filled canvases, and renowned as an influential teacher for generations of artists—first in his native Germany, then in New York and Provincetown—Hofmann played a pivotal role in the development of Abstract Expressionism.

As a teacher he brought to America direct knowledge of the work of a celebrated group of European modernists (prior to World War I he had lived and studied in Paris) and developed his own philosophy of art, which he expressed in essays which are among the most engaging discussions of painting in the twentieth century, including "The Color Problem in Pure Painting—Its Creative Origin."

Hofmann taught art for over four decades; his impressive list of students includes Helen Frankenthaler, Red Grooms, Alfred Jensen, Wolf Kahn, Lee Krasner, Louise Nevelson and Frank Stella. As an artist Hofmann tirelessly explored pictorial structure, spatial tensions and color relationships. In his earliest portraits done just years into the twentieth century, his interior scenes of the 1940s and his signature canvases of the late 1950s and the early 1960s, Hofmann brought to his paintings what art historian Karen Wilkin has described as a "range from loose accumulations of brushy strokes…to crisply tailored arrangements of rectangles…but that somehow seems less significant than their uniform intensity, their common pounding energy and their consistent physicality." 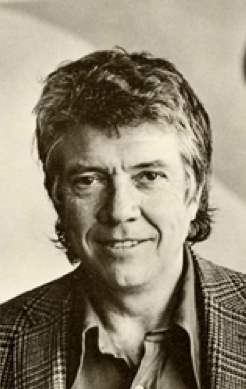 Originally from South Dakota, Ray Parker entered the University of Iowa in Iowa City in 1940; he earned his MFA in 1948. From 1948 to 1951 he taught painting at the University of Minnesota in Minneapolis. During the 1940s his paintings were heavily influenced by cubism. In the early 1950s, however, Parker became associated with the leading Abstract Expressionists of the day, including Mark Rothko and Willem de Kooning. Parker soon began to simplify and refine his works realizing that through abstraction, and color his paintings could convey and express emotion.Like Piet Mondrian, Stuart Davis and Jackson Pollock, Parker was a fan of jazz music; and his interest in jazz, combined with his interest in abstract expressionism, led to his improvised painting style.

Norman Bluhm
Norman Bluhm was born in Chicago in 1921, and initially studied architecture at the Illinois Institute of Technology with Mies van der Rohe. He studied briefly in Florence before moving to Paris in 1947 to continue studies at the Ecole des Beaux-Arts. After serving in World War II, Bluhm lived in Paris and developed an interest in figurative painting. In the 1960s, Bluhm was exploring relationships between swirling, loosely applied forms and unexpected arrangements of color in abstract painting. He used large brushes, soaked with vibrantly hued paint, and treated his work surface with enthusiasm and energy. This method produced works that were orgiastic in their dramatic intensity—bold, organically applied pigment insouciant in its application and outlook.

Download Full Biography
Louise Nevelson
Acclaimed for her development of a unique sculptural vocabulary and process, Louise Nevelson remained committed to innovation, experimentation, and her own personal artistic style for over five decades. Working within tradition of assemblage, she crafted abstract three-dimensional boxes, walls, totems and environments, comprised mostly of assembled found materials. The artist discovered her raw materials while walking the streets of New York, drawing cast-off debris from curbsides, dumps, and demolition sites. The found objects incorporated in her sculptures range from architectural remnants such as chair legs and balusters to scrap construction pieces revealing the ravages of tools and time.