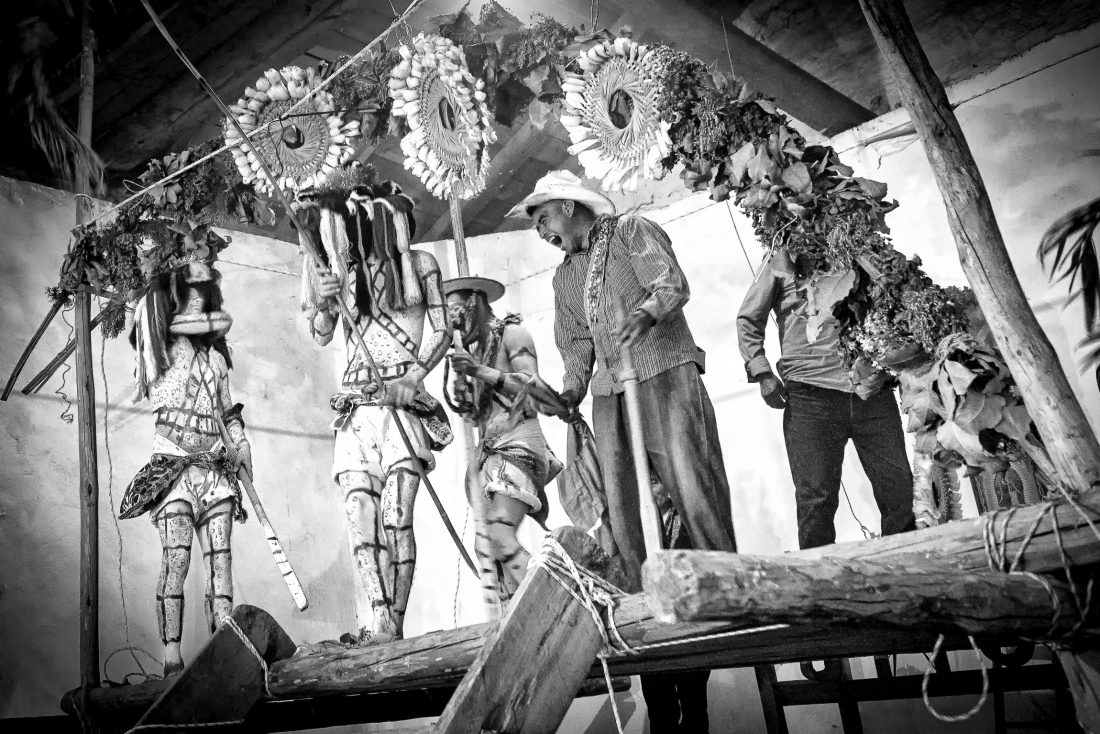 The Coras or Náayerite, as they call themselves, were not subjugated by the Spanish until  the Sierra del Nayar region was conquered in 1722 by Juan de la Torre. It was incorporated into the Crown’s lands under the title of the New Kingdom of Toledo. The Jesuits then took charge of evangelizing the indigenous people in the region and  gathered them into towns founded around mission churches.  After the Jesuits were expelled by the Cora in 1767, the influence of Catholicism became intermittent and remains so today.

Santa Teresa, with about 1,500 inhabitants, is one of the most remote of the villages in Nayarit.  From Guadalajara it takes 10 to 11 hours by car to reach there.  The road is rough and the villagers like it that way, better to maintain their isolation and keep outsiders away.

Judea begins on the Wednesday before Easter. In the morning men with tall sticks run around the periphery of the village to mark its boundaries and “Close the Glory.”  In the afternoon families gather in the church and receive blessings from their patriarchs.

On Thursday morning men and boys gather at the home of the “Guardian,” a village elder who assumes this position for five years. He and his group of respected village elders or “mayordomos” form a brotherhood that oversees the Holy Week activities. Outside his home, males of all ages paint themselves in black and white and undergo a symbolic metamorphosis into “judios” (Jews) or “borrados” (erased ones).  The atmosphere is raucus and there is much jostling leading to the onset of mock battles that will take place over the next three days.  Some of the older men wear a traditional woven straw hat with leather details, while younger men favor hats covered with brightly covered ribbons. In earlier times, the men wore short white pants of folded cloth, but today many are in jeans or cutoffs.

Off to the side of the Guardian’s home, women decorate eggs with simple dyes and a black paint. Later these were placed throughout the plaza by an old woman. On this day, women are not allowed to wear their hair in braids or pulled back with combs. In the afternoon they gather in the front of the church and submit to symbolic hair cuts. Throughout the afternoon groups of painted men roam around the village looking for the “Centurions,” two men on horseback. In the front of the church interior a wooden stairway that seems to harken back to a prehistoric stgepped pyramid leads to the elevated altar. Candles and greenery line the sides of the stairway and the church is thick with decorations made of natural materials like palm fronds. In the early evening a procession of all the townspeople departs from the plaza and slowly circles the village. The wooden saints from the church are placed on small paliquins and held high above the crowd. Women carry bowls with burning copal and the air is filled with its smoke and perfume. Back at the church the saints—Teresa, Joseph, Anthony, James, Michael the Archangel, the Holy Child of Atocha and Our Lady of Sorrows—are kissed and blessed before being covered again under the watchful eyes of a small group. The Centurions on horseback continue to ride in and out of the plaza on their horses, one white  and the other black.

On the morning of Good Friday the town is quiet except for the sound of drums and flutes in the background. In the church, eight women gather in a corner with a huge bag of cotton bolls which they clean of burrs and then gently stretch out into flat, round discs. Little girls clean fresh flowers and place them around the church.  The elderly church cantor pulls out his book of handwritten songs and shows it to us. Suddenly a large group  enters the church. Palm fronds that have been blessed are distributed to members of the eager crowd who will take them home for good luck in the coming year.  And at 12:20 pm, just as the crowd calms down, the judios storm in and begin to destroy the steps leading to the altar. There is mayhem as the altar is stripped of its decorations and the steps are demolished, symbolizing the crucifixion of Christ. Just outside the church, men read imaginary text on banana leaves.  Others begin to collect their sticks, a sign that something is about to happen. The two Centurions ride into the plaza on their horses and ritual battles begin. Another procession with the wooden saints circles the town and the church is quiet once again. At 3:30 pm a black shroud in the church, Santo Entierro, the symbol of the dead Christ, is decorated with the cotton discs representing clouds and ribbons. Two hours later the shroud is carried in a quick, soundless procession around the village. The Centurions appear once again and the battles continue and strengthen in intensity throughout the evening and into the night.

On Holy Saturday the exhausted warriors continue to wage war, and men with drums and flutes continue to make music, always in the background.  Two donkeys appear with a man in a curly black wig, perhaps a signal for the borrados to storm again into the church. They separate into two groups with an aisle in the middle and lay down on ther floor, writhing as if in pain. Historic photographs of the Judea show the borrados sliding on their backs out of the church and onto the plaza, but this group stays inside.  Soon they run out. As one of the few humorous moments in the four-day celebration, they lift the skirts of young girls amid screams and laughter, looking for the Centurion. Inside the church a small ceremony takes place with seven people who are blessed with sticks with ribbons. Across the plaza a group of men assemble in heated discussion. Fireworks go off, the Centurions ride out of town and Judea is over for another year.