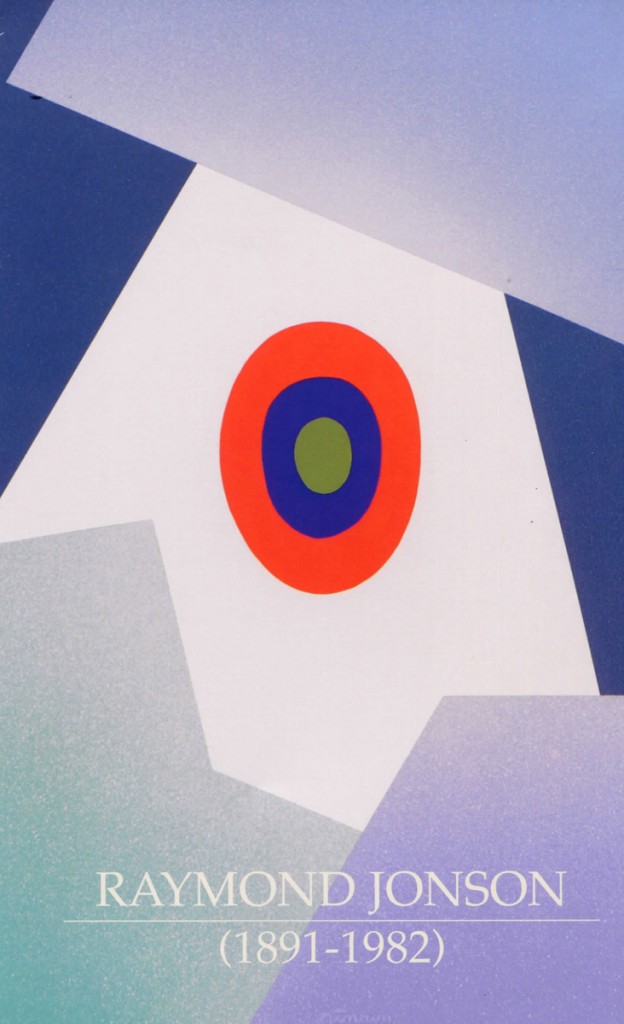 The years from 1953 to 1978 exemplify the most important quarter century in Raymond Jonson’s career, when due to declining sight, he quit painting. During this period he left behind the transcendental aesthetics that he had helped develop in the 1930s and 1940s (put abruptly to an end by World War II) and left his post as professor of painting at the University of New Mexico at the end of the 1953 academic year. Both instances allowed the artist to take full stock of his achievements and passions over the past forty years and look ahead towards fulfilling these without distraction.

In the 1940s and 1950s European modernism was effectively stalled by the war, and Jonson began to look more closely at contemporary American painting, especially abstract expressionism, adopting a more spontaneous approach in his work using brayers, rags, and sticks and other means to achieve unpredictable results. These works allowed Jonson, who had until then been dealing in metaphors and symbols, to loosen his control of the results and let his paintings develop instinctively.

Upon this foundation, Jonson proceeded over the next two decades to gradually elaborate on the gesture and its meaning. But rather than becoming more complex and physical, his gestures evolved in the opposite direction, towards what the artist’s biographer Ed Garman called the “single gesture,” the kind of mark made in response to a single impulse, a feeling of “cosmic rightness” rather than a powerful, personal emotion.

This unity of purpose was enhanced with the introduction of polymer paints in 1957, allowing Jonson to advance far more quickly. The “perfect medium” in Jonson’s mind, polymers were durable, permanent, and, most importantly, dried quickly, allowing him to work faster and see his results almost immediately. In 1962, with the medium perfected to his satisfaction, Jonson abandoned all other mediums for polymer, which, in conjunction with his nearly exclusive use of Masonite instead of canvas, further cleared his studio and his mind of unnecessary clutter.

His designs and colors became more economical, with the subjugation of variety, supplanted with broad shapes defined by crisp edges and a single color predominating as the translucent overlapping forms, a staple of his 1930’s and 40’s work, for the most part disappeared. Space surrounds and impregnates these shapes, neither behind nor in front, but pervasive, luminous, and infinite—the fourth dimension of Cubism and modern physics taken to an entirely new level. The lucid clarity of these final paintings are the culmination of Jonson’s nearly 70 year journey into the furthest reaches of the imagination and, in this writer’s mind, are his most accomplished achievements.