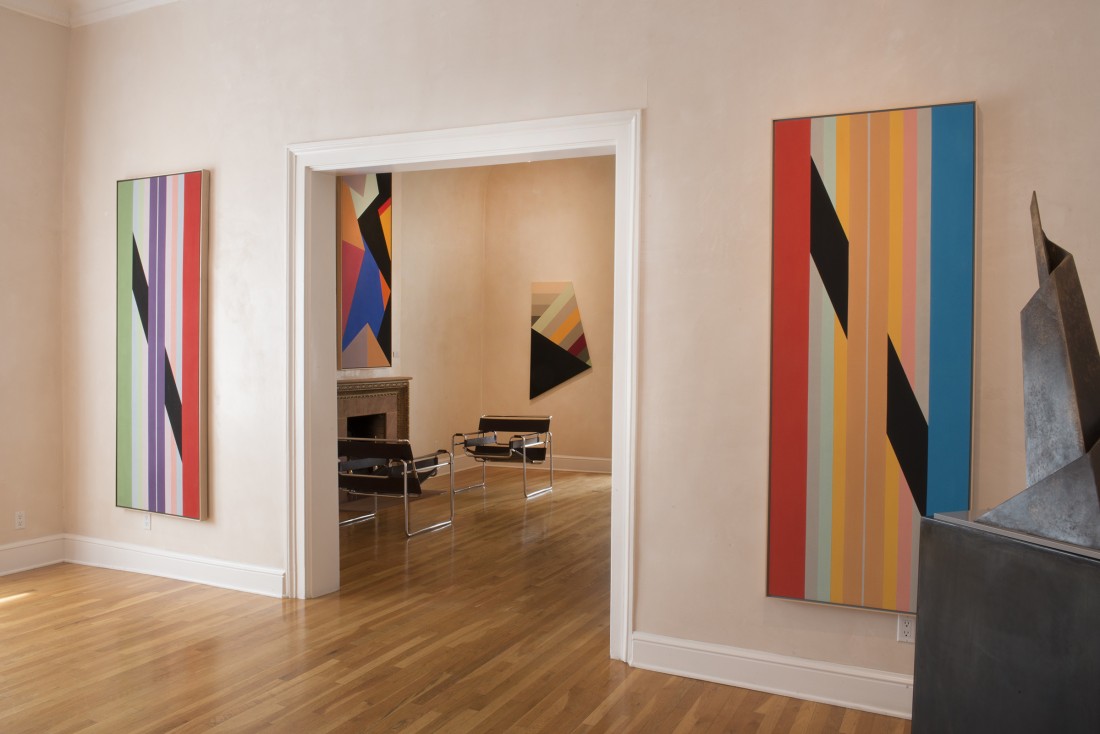 Mokha Laget was born in Algeria, where she spent her early childhood, and educated in North Africa, France, and the United States. At age five she crossed the Sahara desert with her family, and the brilliant light, color, and contrasts left a lasting impression.

At the Corcoran College of Art and Design in Washington, D.C., Laget studied under several members of the Washington Color School. A visual-arts movement of the late 1950s through the mid-1960s, the Washington Color School artists, which included Gene Davis, Morris Louis, Howard Mehring, Kenenth Noland, Thomas Downing, and Paul Reed, painted largely abstract works and were central to the larger American Color Field movement. In 1980 Laget met Gene Davis; shortly thereafter she began working as his studio assistant, a position she kept for many years. Their daily exchanges on art profoundly influenced her practice, and Davis once said “Mokha Laget is an artist I greatly admire. She has been instrumental in many of my works.”
In the late 1990s Laget moved to the Southwest and began to paint large-scale canvases using acrylic, tempera, pigment, and ink. Though her early training included learning intricate glazing techniques and studying the work of European Old Masters, Laget refined her artistic focus as she matured, and from earlier, heavily layered surfaces, she created crisp and geometrically defined canvases, colored with her unique application of acrylic and clay-pigment paint.

Simmering reds, coral oranges, and moody dark blues populate Laget’s latest body of work, which she defines spatially with geometric patterns that simultaneously divide and unite the compositions. Color Walk is a continuation of a body of “architectonic” works she began in 2008, wherein horizontal, vertical, and diagonal lines interact with the surrounding architectural space. Laget describes her current work by saying it “pushes the boundaries of complex relations between color and composition aimed at a sensual and deeply immersive experience. It’s all about juxtaposition and scale. I am seeking the vibrational frequencies and the visual impact of color and space as relational forces.” The paintings’ repetitive attributes (stripes, wedges, triangles) function as formal elements akin to syncopated jazz chords, wherein compositional tempo and harmony ingeniously modulate the color.

In 2012, painter Paul Reed called Laget “the real deal, a genuine Color Field painter; only she superimposes French impressionist colors and infuses her works with the essence of New Mexico.” Ferdinand Protzman of The Washington Post noted the ”compressed energy and imposing physical presence” evidenced in her work. Indeed, Laget’s implementation of vivid color, striking geometric arrangements, and often-imposing scale generates a distinctive sense of movement. In this way, the artist forges an ingenious interplay between interior and exterior spaces—opening up multiple potential focal points for the viewer. For many of the works included in Color Walk, the color black is thematically integral, encouraging heightened drama between angles and geometric arrangements; though Laget paints in a decidedly non-objective manner, black injects an almost figurative drama to many of the works.

Mokha Laget has worked as an independent curator, and is a published writer, translator, and poet. Her work is actively exhibited in the United States and abroad, and is included in private and corporate collections of national and international stature. Laget makes her home in Santa Fe, New Mexico.