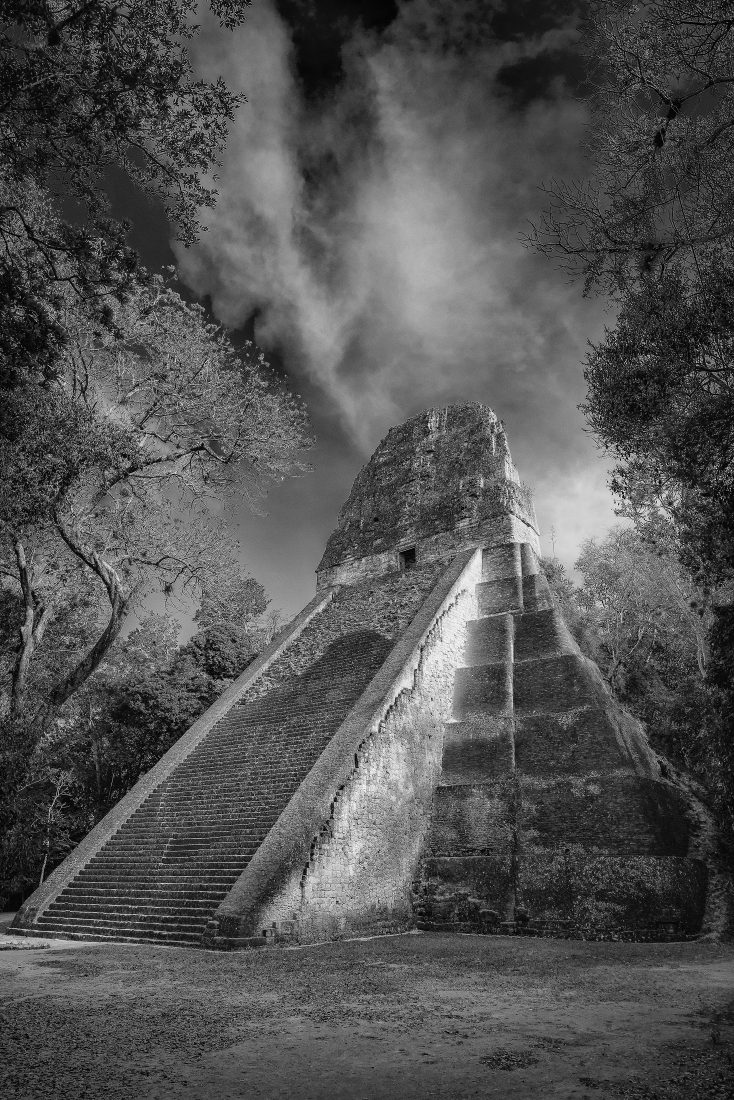 Peyton Wright Gallery is delighted to announce Ancient Kingdoms, Hidden Realms, an exhibition highlighting Mayan and Khmer kingdoms through an extraordinary marriage of pre-Colombian and Asian artifacts and luminous black and white images of forgotten Mayan and Khmer ruins captured by photographer William Frej. The exhibition features an artist’s reception on Friday, August 4, 2017 from 5:00 to 7:00 p.m., and continues through September 30.

“Look this way” is the soul’s summons to wonder. Every child knows the call. It is the insistent whispering voice of curiosity within that leads us, ultimately, to care about all that is mystery. From the periphery of our mind’s eye, through the haze of everyday distraction, we catch glimpses of the tantalizing unknown. For some, these fragmentary sightings of the possible ignite an unquenchable desire to know. Their search begins in an instant, and may last a lifetime.

Time lays a blurring tint over fact. What is known slips from mind to become the past falling into rank with the rest of rumor we recite as history. The recipe for concrete, one of man’s most durable and serviceable discoveries, forgotten, though the Roman aqueducts stand in evidence of its durable reality. Sometimes things are lost until mankind’s relentless search for reason sweeps back and restores the fact of past truths with rediscovery of ancient culture. We find sites filled with articles that demonstrate the ancients’ fascination with ritual, beliefs, and the arcana of daily life. Sites that lay hidden until lit by the accidental turn of a spade. Even then, meaning, the realm of understanding created and inhabited by the original believers, along with what they felt and were animated by, remains obscured under time’s forgetful sediment.

Still, through all of history, the common thread of wonder, expressed in reverence for objects, persists. Evidence of ancient fascination with surprise and beauty, the effort to reproduce the stars as jewelry, the night sky as diaphanous cloth, are here on display in the gallery. Elements of the magnificent assembled as city-scale monuments to the power of deities demanding worship surrounds us in the art of daily articles, furnishings, objects of worship, wardrobe and adornment that that are the fundamental landscape of this show. Here we have assembled a trove of object and image that invite you to speculate, admire, and rejoice in the primal human fascination with mystery as you stroll the rooms.

Bill Frej, the renowned photographer, began following that flicker of something he saw in the corner of his eye when he first ventured into the Yucatan in 1971. As a student of architecture and photography he became entranced with the mystery embodied by the ancient monumental structures hidden deep in Mesoamerica’s jungle vastness. He had so many questions. Who were these people? What was the dimension of their society, their beliefs, their own sense of purpose? Such depth to the unknown.

But before they could begin to be answered, life intervened. And took him to Asia where he worked and wandered absorbing the river of culture that flows endlessly across millennia of accreted memory over vast plains, mountains, and river deltas. Asia, where he and his wife spent 430 days on foot traversing the Himalaya following a mutual desire to connect spirit and purpose.

Forty years on he returned to the cradle of his inspiration. There he spent three years penetrating remote jungles and the forgetful gauze of experience to document the wonders of ancient Mayan development in the Yucatan, Chiapas, Quintana Roo and Campeche obscured and consumed by the careless evolution of the Lacandon and Peten jungles.

Ultimately the impulse to follow the renewed scent of mystery led him to Angkor Wat in Cambodia, where he stood beneath the massive sculpted ramparts of a citadel to ancient worship, and recognized he had come full circle. There, surrounded by exquisite, carved testimonials to the passion inspired by devotion, he understood the stark similarities between the ancient impulse to worship, know, and be dazzled by mystery in the jungles of Cambodia, and its direct and deep human connection to the remnants of that same universal impulse he had witnessed as a young man wandering among the impenetrable forest canopies of deep, ancient Mexico.

Capturing the essence of that sense of mystery, striving to create a visual portal through which the rest of us can step into the presence of that state of suspended disbelief he experienced in two centers of ancient culture separated by oceans of space time and meaning is what Bill’s photos do.

At a scale we can understand, in a language of image we cannot escape the depth of, Bill’s extraordinary black and white works summon us in the ancient manner to: “Look this way”, and wonder.

As in last year’s exhibit, “The Maya”, we invite you to take a leisurely wander through the gallery. It will reveal the intimate relationship between Bill’s stunning images and the collection of ancient art and cultural objects, ceramic, textile, wood and stone, etc., that are the body of art produced by these and related ethnic cultures.