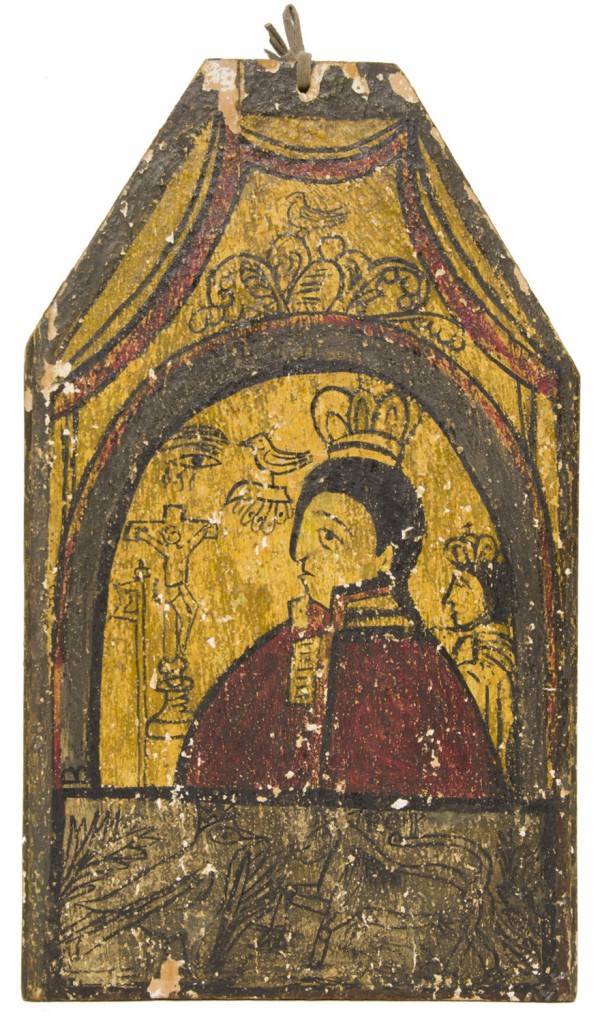 Inquire Enlarge
San Luis Rey
ca. 1790
9.5" x 13"
Retablos, wood, gesso, polychrome
Region: New Mexico
Louis IX of France was crowned in Reims at the age of twelve. As king his actions were inspired by Christian values and he punished blasphemy, gambling, interest bearing loans and prostitution. He banned trials by ordeal and introduced the presumption of innocence in criminal procedures. To enforce the correct application of this new legal system he created bailiffs and provosts. According to his vow made after a serious illness, and confirmed after a miraculous cure, he took an active part in the Seventh and Eighth Crusades in which he eventually died from dysentery.

José Aragón
One of the few artists working in Spanish New Mexico during the late 18th and early 19th centuries, Jose Aragon focused on religious images for churches and homes. He was a wood carver who used local woods such as ponderosa pine or cottonwood roots and also a painter who used watercolor and tempera. For his woodcarvings, his method was to cover the carved object with gesso or plaster and then apply color with watercolor paints. He was especially noted for his creative decorative motifs, color contrasts, boldness of line and abstract forms. Much of his work was creating monumental altar screens, and he also supervised church-decoration projects and carved retablos. Evidence shows that he was active for nearly fifty years, from 1815 to 1862.