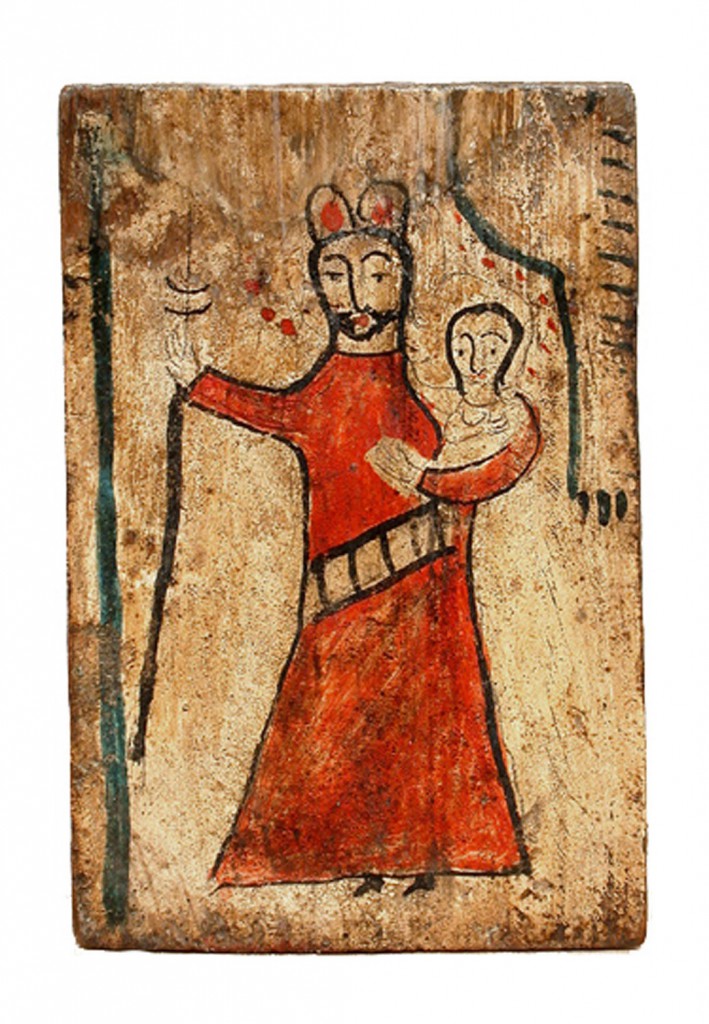 Inquire Enlarge
San José con Niño
ca. 1880
7.5" x 5"
Retablos, wood, gesso, polychrome
Region: New Mexico
Saint Joseph is the husband of Mary and the foster father of Jesus. He is universally esteemed as the patron saint of the family. He usually is depicted holding the Christ child and a flowering staff. He is sometimes shown with a crown and is always bearded. The flowering staff refers to the miraculous blossoming of his staff during the courtship of Mary, which led to his being selected as her successful suitor.

José Benito Ortega
José Benito Ortega, the last of the late 19th-century santeros, traveled throughout northern New Mexico and southern Colorado making santos for small chapels, meeting houses, village homes, and for Penitentes (members of a religious brotherhood) from the 1870s to the early 1900s. His career was predated by New Mexico’s first documented sawmill, installed by the American army in 1846. His figures were often created from scrap mill board and widely available calico rags, upon which he applied prepared gesso. Most of his work was done in the remote villages near Mora, his home, at a time when the clergy was attempting to replace santos with mass-produced plaster statues. In spite of this, Ortega continued to produce traditional images for Penitente moradas and for church, chapel, and private use. In 1907, after the death of his wife, he moved to Raton and ceased making santos. He took up work as a house plasterer and died in Raton in 1941. Today there are more images attributed to Ortega than any other New Mexican santero of the nineteenth century.