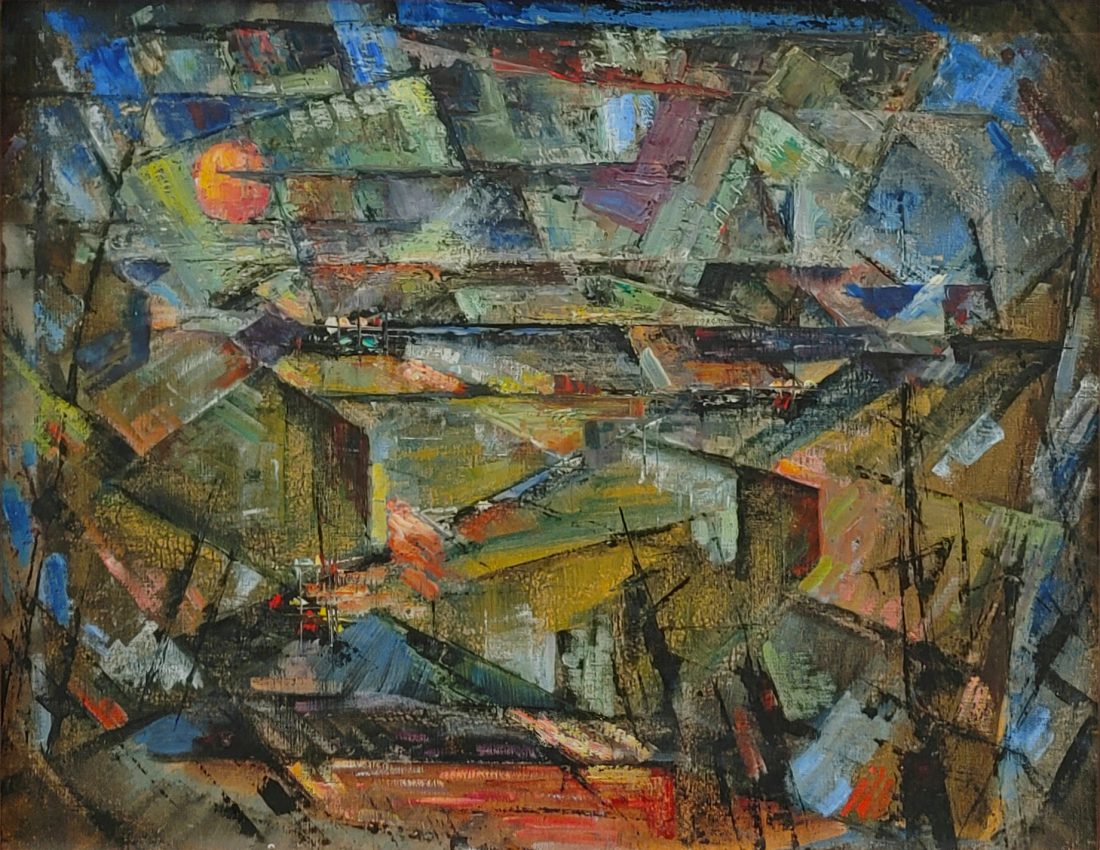 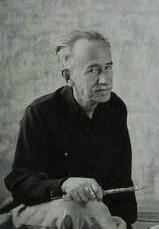 Artist and teacher, Charles (“Charlie”) Bunnell worked in a variety of styles throughout his career because as an artist he believed, “I’ve got to paint a thousand different ways. I don’t paint any one way.” At different times he did representational landscapes while concurrently involved with semi- or completely abstract imagery. He was one of a relatively small number of artists in Colorado successfully incorporating into their work the new trends emanating from New York and Europe after World War II. During his lifetime he generally did not attract a great deal of critical attention from museums, critics and academia. However, he personally experienced a highpoint in his career when Katherine Kuh, curator at the Art Institute of Chicago, personally chose one of his paintings – Why? - for its large exhibition of several hundred examples of abstract and surrealist art held in 1947-48, subsequently including it among the fifty pieces selected for a traveling show to ten other American museums.

An only child, Bunnell developed his love of art at a young age through frequent drawing and political cartooning. In high school he was interested in baseball and golf and also was the tennis champion for Westport High School in Kansas City. Following graduation, his father moved the family to Denver, Colorado, in 1916 for a better-paying bookkeeping job, before relocating the following year to Colorado Springs to work for local businessman, Edmond C. van Diest, President of the Western Public Service Company and the Colorado Concrete Company. Bunnell would spend almost all of his adult life in Colorado Springs.

In 1918 he enlisted in the United States Army, serving in the 62nd Infantry Regiment through the end of World War I. Returning home with a 10% disability, he joined the Zebulon Pike Post No. 1 of the Disabled American Veterans Association and in 1921 used the benefits from his disability to attend a class in commercial art design conducted under a government program in Colorado Springs. The following year he transferred to the Broadmoor Art Academy (founded in 1919) where he studied with William Potter and in 1923 with Birger Sandzén. Sandzén’s influence is reflected in Bunnell’s untitled Colorado landscape (1925) with a bright blue-rose palette.

For several years thereafter Bunnell worked independently until returning to the Broadmoor Art Academy to study in 1927-28 with Ernest Lawson, who previously taught at the Kansas City Art Institute where Bunnell himself later taught in the summers of 1929-1930 and in 1940-41. Lawson, a landscapist and colorist, was known for his early twentieth-century connection with “The Eight” in New York, a group of forward-looking painters including Robert Henri and John Sloan whose subject matter combined a modernist style with urban-based realism. Bunnell, who won first-place awards in Lawson’s landscapes classes at the Academy, was promoted to his assistant instructor for the figure classes in the 1928-29 winter term. Lawson, who painted in what New York critic James Huneker termed a “crushed jewel” technique, enjoyed additional recognition as a member of the Committee on Foreign Exhibits that helped organize the landmark New York Armory Exhibition in 1913 in which Lawson showed and which introduced European avant-garde art to the American public.

As noted in his 1964 interview for the Archives of American Art in Washington, DC, Bunnell learned the most about his teacher’s use of color by talking with him about it over Scotch as his assistant instructor. “Believe me,” Bunnell later said, “[Ernie] knew color, one of the few Americans that did.” His association with Lawson resulted in local scenes of Pikes Peak, Eleven Mile Canyon, the Gold Cycle Mine near Colorado City and other similar sites, employing built up pigments that allowed the surfaces of his canvases to shimmer with color and light. (Eleven Mile Canyon was shown in the annual juried show at the Carnegie Institute in Pittsburgh in 1928, an early recognition of his talent outside of Colorado.) At the same time, he animated his scenes of Colorado Springs locales by defining the image shapes with color and line as demonstrated in Contrasts (1929). Included in the Midwestern Artists’ Exhibition in Kansas City in 1929, it earned him the gold medal of the Kansas City Art Institute, auguring his career as a professional artist.

In the 1930s Bunnell used the oil, watercolor and lithography media to create a mini-genre of Colorado’s old mining towns and mills, subject matter spurned by many local artists at the time in favor of grand mountain scenery. In contrast to his earlier images, these newer ones – both daytime and nocturnal -- such as Blue Bird Mine essentially are form studies. The conical, square and rectangular shapes of the buildings and other structures are placed in the stark, undulating terrain of the mountains and valleys devoid of any vegetation or human presence. In the mid-1930s he also used the same approach in his monochromatic lithographs titled Evolution, Late Evening, K.C. (Kansas City) and The Mill, continuing it into the next decade with his oil painting, Pikes Peak (1942).

During the early 1930s he studied for a time with Boardman Robinson, director of the Broadmoor Art Academy and its successor institution, the Colorado Springs Fine Arts Center from 1930 to 1947. In 1934 Robinson gave him the mural commission under the Public Works of Art Project (PWAP) for West Junior High School in Colorado Springs, his first involvement in one of several New Deal art projects employing artists during the Great Depression. He thereafter assisted Frank Mechau with his mural for the Colorado Springs Post Office and Mechau, in turn, helped get him transferred to the Treasury Relief Art Project (TRAP) that commissioned work from artists to decorate existing and new federal buildings throughout the country. When it closed down due to lack of funds, Bunnell participated in the Federal Art Project (FAP) for which he did easel paintings in the proscribed American Scene painting style.

At the same time, he also began working on his own in a non-regionalist style that evolved into full-blown abstraction by the early 1950s. One indication of the new direction, a drawing - Evolution of Art (1937), shows three warheads breaking down various barriers in their path to make way for new developments in art. It may have been inspired by a traveling exhibition of abstract art which he saw at the Colorado Springs Fine Arts Center in 1936. Another shift toward abstraction was his Black and Blue watercolor series of eighty-three ink and watercolors begun in 1936 and pursued through the 1940s.

As described by Dord Fitz, Bunnell’s friend, gallery owner and dealer based in Amarillo, Texas, the Black and Blue Series “presents a world of the spirit where all men are one… [Bunnell] carries the spectator into a spiritual realm which remains undisturbed by the colossal misunderstandings which plague a life dominated by material and physical things.” Fitz also noted that the series blends “the various feelings concerning theories of Existence – Buddha, Christ, Lao Tze, Confucius and Mohammed. All become One.” The series mirrors Bunnell’s personal spiritual journey extending into the late 1950s reflected in his art. The loss of his 10-year old son, Lee, in 1938, and the death and destruction caused by World War II also found expression in the series, as well as in his moody surrealist pieces from the mid-to-late 1940s, such as the Bird of Doom watercolors and a set of the seven deadly sins.

The geometric shapes of his earlier representational work reappeared in the 1950s in the form of roughly- rendered rectangles, squares and triangles in various sizes and colors in his pure abstractions, such as an untitled composition (1951) of small, massed geometric shapes in an impasto surface highlighted in bright red, blue and green. By mid-decade his palette became a little more subdued with larger shapes dominating the canvas, as in Artist and His Pictures (1955), and Progression (1956) with its superimposed clusters of smaller geometric shapes. These and other similar abstract paintings constitute the highlight of his career during which, in the words of Al Kochka -- curator of Bunnell’s posthumous retrospective (1987) at the Amarillo Art Center – “he never ceased to experiment and expand his visual language.”

In the artist’s statement for the catalog of his exhibition at the Colorado Springs Fine Arts Center in 1956, Bunnell said of his work: “Art to me is a search: in other words, a way of living…I have painted for thirty-five years going through many phases from realism and portraiture to, I feel, advanced modern concepts, where the observer can, by looking at my paintings, become a creator as well as I. In other words each viewer can see what he feels in my work.”

Bunnell continued to teach throughout most of his career. Having briefly taught art classes toward the end of the Federal Art Project during the Depression era, he began conducting classes in his own Colorado Springs studio in 1949. He continued mentoring new artists until the last years of his life before succumbing to emphysema. In the 1950s he was one of the artists Dord Fitz attracted to teach and display his work in Amarillo, along with Louise Nevelson, James Brooks, Leon Polk Smith and Elaine de Kooning, among others. In 1960 de Kooning painted Bunnell’s portrait, now in a private collection.