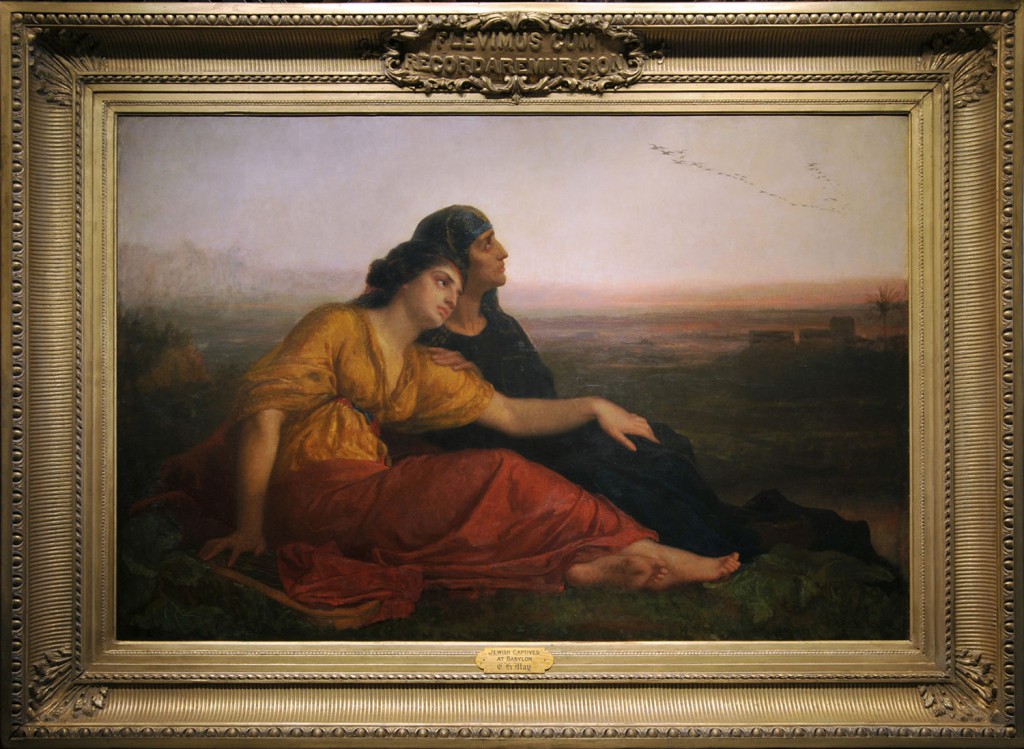 By the rivers of Babylon, there we sat down,
and there we wept when we remembered Zion.

On the willows there we hung up our harps.

For there our captors asked us for words of song,
and our tormentors, for mirth:
"Sing to us from the songs of Zion!"

How could we sing the song of the LORD on an alien land?
If I forget thee, O Jerusalem, may my right hand forget its skill,
May my tongue cling to the roof of my mouth
if I do not remember you,
if I do not set Jerusalem above my highest joy.
Remember, O LORD, against the sons of Edom
the day of Jerusalem's fall, those who said:
"Tear it down! Tear it down to its foundation!"

The son of Edward Harrison May Sr., a Dutch Reformed clergyman, May was born in Croyden, England, and brought to America in 1834 when his father accepted a post in New York. After early training in civil engineering, May turned to art, studying for a time with Daniel Huntington. May first exhibited at the National Academy in 1844. With Joseph Kyle and others he produced a panorama representing Bunyan's Pilgrim's Progress which was first exhibited in 1848, to great financial success. In 1851 May was able to move permanently to Paris.

In Paris he soon entered the atelier of Thomas Couture for further study. May produced historical and genre paintings as well as profitable portraits of the well-to-do. He exhibited at the Paris Salon from 1855 to 1885; he won an award in 1855, one of the first Americans to do so. In 1878 he was elected to the National Academy of Design in New York (although he never completed the process of becoming a member.) He was regarded as one of the leaders of the American expatriate art community in Paris.

During the Franco-Prussian War May served as a captain in the "American Ambulance" - a temporary military hospital staffed by volunteers from the American colony in Paris. He received a medal for his services during the war.

view all works by Edward Harrison May