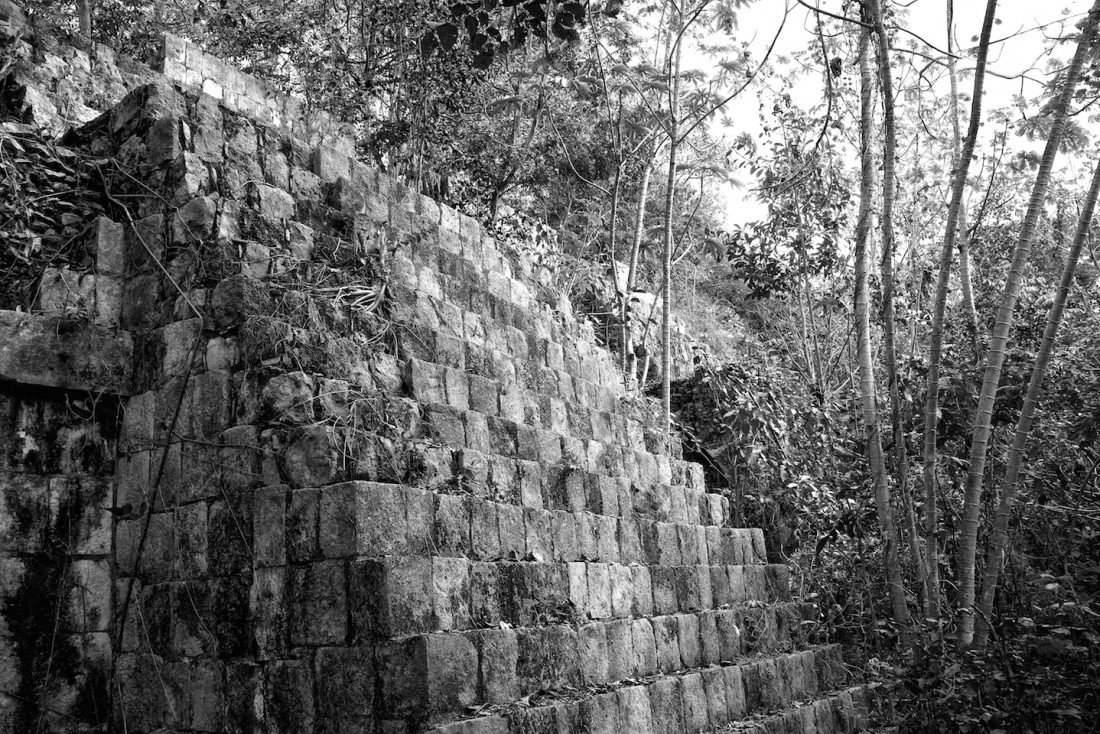 Inquire Enlarge
Chunchucmil, Yucatan, Mexico
2014
30" x 45" Framed: 31.5" x 46.5"
Photography, Archival Chromogenic Silver Halide Print, ed 6
Signed, titled and dated on verso, lower left
This site was most populous in the Middle Classical Period (400-650 AD). Dominated by over a dozen pyramid ranging in height from 26 to 60 feet tall, this recently studied city was one of the largest and most densely settled among Mayan polities.

William Frej began his career as an architect and later served as an international development specialist, living in Nepal, India, Indonesia, Poland, Kazakhstan, and Afghanistan over a period of 27 years. Always with his camera at his side, he has been photographing indigenous people and their environments for over 40 years, documenting the changing lifestyles and architecture of many of the world’s unique and ancient cultures.

The photography captures both the stunning high peaks and remote mountain ranges of Asia, as well as the living cultures and religious ceremonies in the faraway regions of the Great Himalayan Range, the Ghats of Varanasi, India, rituals in Guatemala and Mexico, and the stone monuments of Cambodia’s Khmer. Frej’s transcendent photography will transport the viewer to these places of mountain grandeur and still vibrant religious practice.

Frej and his wife Anne first visited Nepal in 1981 on a month-long trek around Manaslu, the eighth highest peak in the world. Inspired by the practice of Tibetan Buddhism they encountered in remote mountain villages, this trek led to a lifelong quest, documenting both the world’s highest peaks, as well as the resilient people living throughout the roof of the world.

They returned to Nepal in 1982, and in 1985, they took a two-year sabbatical walking to the base camps of the world’s highest peaks. Starting in the mountains of northern Pakistan, bordering Afghanistan’s Wakhan Corridor, the Frej’s walked over 3,000 miles on their personal pilgrimage through Pakistan, India, Nepal and Tibet. Throughout this sojourn, Asia’s highest peaks and their outposts of remote civilizations and religions provided a wealth of subject matter for photography, documenting peaks, people and ceremonies seen by only a few.

Their quest continued over next three decades, until the present, returning to the Himalayas many times, living in Central Asia and Afghanistan, and documenting not only mountains, but ancient religious ceremonies that still define a way of life for Asia’s Hindu, Bon and Buddhist peoples. Frej’s June of 2018 visit to the Indian Himalaya retraced the steps of India’s devout holy men, the Sadhus, to Gaumukh glacier, the source of the holy Ganges, and continued through Ladakh, visiting 24 remote monasteries and participating in ceremonies at Lamayuru and Hemis Monasteries.

Frej has also spent considerable time the past five years documenting both the religious rites of Mexico’s indigenous communities and the contemporary Maya, and the ancient cities their fore-bearers so skillfully created over a millennium ago. His images of Semana Santa, Dia de los Muertos and the Feast Day of San Ildefonso transport us to a place that imbues strong transformational power.

In 2014, his one-person photographic exhibition Enduring Cultures was featured at Galeria La Eskalera in Merida, Mexico. It included black and white and color photography from Afghanistan, Upper Mustang, Nepal, and San Agustin Etla, Oaxaca, Mexico. His photography was featured in a major exhibition which opened June 2015 at the Museum of Spanish Colonial Arts in Santa Fe, New Mexico, titled Tradicion, Devocion Y Vida: 80 years of Black and White Photography in New Mexico and Mexico. His photography on Day of the Dead in Oaxaca, Mexico was exhibited October-December 2015 in a one-person show at Peters Projects Gallery in Santa Fe, New Mexico. A number of his photographs were exhibited at the Museum of Spanish Colonial Art in their exhibitions Chimayo: A Pilgrimage through Two Centuries and Mirror Mirror: Frida Kahlo Photographs, in 2017. He was selected to participate in an exhibition titled Faith in New Mexico at Editions One Gallery in Santa Fe.

Peyton Wright Gallery in Santa Fe, New Mexico, has mounted several major exhibitions, including: The Maya, Photography by William Frej, 2016, of 32 large-scale, black and white photographs of Mexico’s remote, off-the-grid Mayan ruins; Ancient Kingdoms, Hidden Realms,2017, an exhibition highlighting the Mayan and Khmer kingdoms; Ritual of the Cora, 2019, documenting the Holy Week ceremonies of the Cora people in the Sierra del Nayarit, Mexico; Maya Ruins Revisited: In the Footsteps of Teobert Maler, 2020, a unique pairing of archival material with Frej’s current imagery of the same locations; Seasons of Ceremonies, 2021, chronicling religious rituals in Yucatán, Chiapas, and Oaxaca, Mexico and Rabinal, Guatemala; and Travels Across the Roof of the World, 2022, with his wife Anne Frej, chronicling a sweeping yet intimate view of the breathtaking peaks, splendid valleys, and extraordinary people of the Himalaya.

His photographs of the Himalaya, India and Africa were featured in the Edwin Bernbaum book, Sacred Mountains of the World and his photographs of India’s Tilwara camel fair were highlighted in Adventure Travel Magazine. Mr. Frej’s photographic work is represented in numerous public and private collections throughout the United States, Europe and Asia.

He is represented by Peyton Wright Gallery in Santa Fe, New Mexico.

His book of black-and-white photographs, Maya Ruins Revisited: In the Footsteps of Teobert Maler (Peyton Wright Gallery, 2020), has won sixteen awards. His second book, Seasons of Ceremonies: Rites and Rituals in Guatemala and Mexico (Museum of New Mexico Press, 2021), has won thirteen awards including four “photography book of the year” awards and the Gold Medal Best Photography book for 2021 from Foreword Indies/Foreword Reviews.