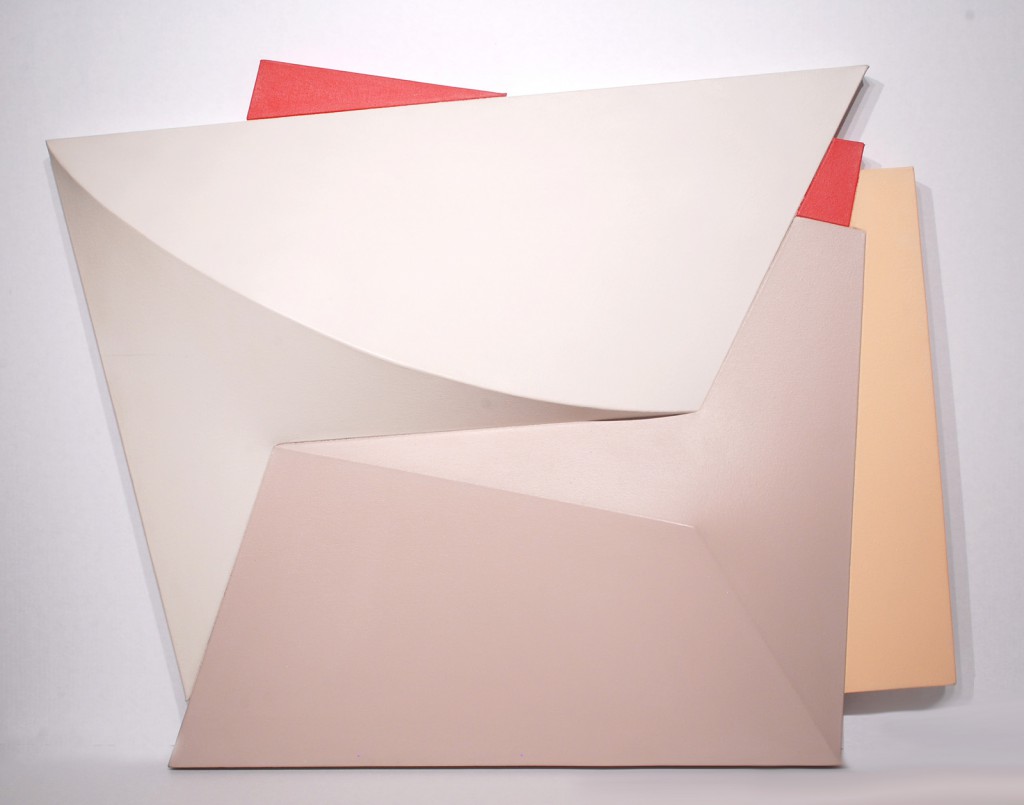 Charles Hinman
Charles Hinman, known for his shaped-canvas sculpture, was born in Syracuse, New York on December 29, 1932. He attended art classes at Syracuse Museum of Fine Arts (now Everson Museum of Art) and earned a Bachelor of Fine Arts from Syracuse University in 1955. He was a professional baseball pitcher for the Milwaukee Braves while pursuing his BFA. From 1955 to 1966, he studied at the Art Students League; then served in the United States Army from 1956 to 1958.

Hinman lived in New York City and held various part-time jobs while he continued to paint. Charles Hinman taught painting and engineering drawing at Staten Island Academy, New York from 1960 to 1962, and was the shop instructor at Woodmere Academy on Long Island from 1962 to 1964. In these two positions, he developed carpentry and engineering skills that gave him the ability to construct his own shaped canvases with complex three-dimensional curves.

In 1963, while seeking an independent path, he created his first shaped canvases in his studio on the Bowery, where Will Insley, who was also working on shaped canvases, and Robert Indiana had studios, as well.

Hinman first received critical attention in the exhibition 7 New Artisits at the Sidney Janis Gallery in May 1964 where he exhibited flat canvases cut at angles and suspended by cords. The other artists in the exhibition were: Larry Bell, Robert Irwin, Norman Ives, Robert Slutsky, Robert Whitman, and Arakawa.

Hinman went on to add the third dimension to his shaped canvases while examining the subtle boundary between the picture plane and the space in front of it, as well as playing with the idea of literal versus illusionistic depth.

Usually Hinman begins his work by building charcoal drawings of volumetric shapes. Out of the series of drawings, he will select one drawing and turn it into “shop drawings” to determine how the organic shape can be turned into a constructed form with intricate shape stretchers supporting it. While building the armature, he addresses the level of three-dimensionality of the work. Once the work has been stretched with canvas and given a ground, he then determines colors, often creating more sketches and repainting areas several times.

In the 1960’s, Hinman used bright colors in his work adding an almost Pop aesthetic to his canvases, such as Poltergeist, 1964, which is in the Museum of Modern Art, New York. He said he was then using color as if he were painting a hot rod. In 1975, Hinman began an all-white series of paintings. Returning to color in the late 1970’s, Hinman treated color as spatial indicators with each color representing a different canvas unit; each color having a separate stretcher underneath it. With a more muted palette of grays, silvers, and tans, the artist attained subtle interactions of color shapes interlocking with each other in space within a rhythmic order.

Hinman’s first solo exhibition was at the Feigen Gallery in New York in Nov.-Dec.1964, quickly followed by exhibitions with Feigen in 1965 at both his New York and Chicago galleries. Out of the 1964 show, the Museum of Modern Art, the Albright-Knox Art Gallery, and Nelson Rockefeller purchased works. In 1965, Hinman was one of four Americans invited to exhibit at the Museum of Contemporary Arts in Nagaoka, Japan where Hinman shared first prize with the Japanese artist Jiro Takamatsu. More solo and group exhibitions followed with Feigen through 1969 and then Hinman signed on with the Paris dealer Denise Rene, having solo exhibitions at Galerie Denise Rene in Paris in 1971 and then in her New York gallery in 1972, 1973 and 1975.

Hinman has visited Japan, Thailand, India, Iran, Greece, Italy, France and England. He served as artist-in-Residence, Aspen, Colorado in 1966. Hinman has taught at Cornell University and at Syracuse University. He has also held teaching positions at Pratt Institute, School of Visual Arts, the Cooper Union, Princeton University, University of Georgia campuses in Athens, Georgia and Cortona, Italy, and other distinguished institutions. Presently, he is teaching at the Art Students League of New York. In 1989, Hinman’s work traveled to Russia for an exhibition organized by Donald Kuspit titled Painting Beyond the Death of Painting at the Kuznetsky Most Exhibition Hall in Moscow. Hinman has credited Russian Supremacists as having a strong influence on his work.