This painting celebrates the foundation of the Royal, Celestial and Military Order of Our Lady of Mercy and the Redemption of the Captives (Latin: Ordo Beatae Mariae de Mercede Redemptionis Captivorum, abbreviated O. de M.), also known as the Mercedarians. It ws founded by Saint Peter Nolasco in Barcelona in 1218. It is a mnedicant order founded for the purpose of ransoming impoverished captive Christians (slaves) held in Muslim hands, especially along the frontier that the Crown of Aragon shared with al-Andalus (Muslim Spain).

Sources for the origins of the Mercedarians are scant and almost nothing is known of the founder, St. Peter Nolasco. A narrative developed between the 15th and early 17th centuries that culminated in Nolasco’s canonization as a saint in 1628.

All the biographers agree that, at some point in his youth, Nolasco became concerned with the plight of Christians captured in Moorish raids and that he decided to establish a religious order to succor these unfortunates. Nolasco began ransoming Christian captives in 1203. After fifteen years of work, he and his friends saw that the number of captives was growing day by day. His plan was to establish a well-structured and stable redemptive religious order under the patronage of Blessed Mary.

The fine oil on copper depicts the central figure of the Virgen de la Merced, or the Blessed Virgin Mary of Mercy, holding the infant Jesus. The Trinity can be seen above her, Jesus holding the cross on the left, God the Father holding the globus cruciger on the right, and the Holy Sprit at the center. She is flanked by Joseph and John the Evangelist. She wears a gold-embroidered garment bearing the symbol of the Mercedarian Order, and she gives a cloth bearing the symbol to Peter Nolasco. Angels and cherubs complete the scene. 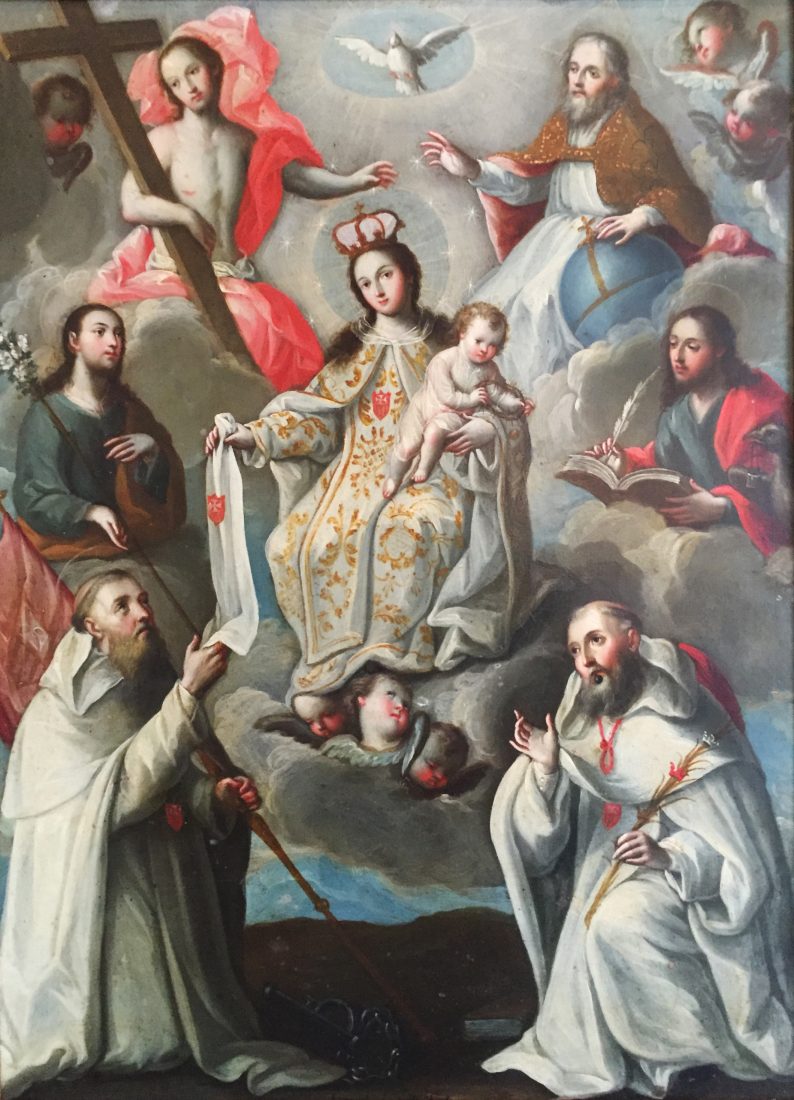