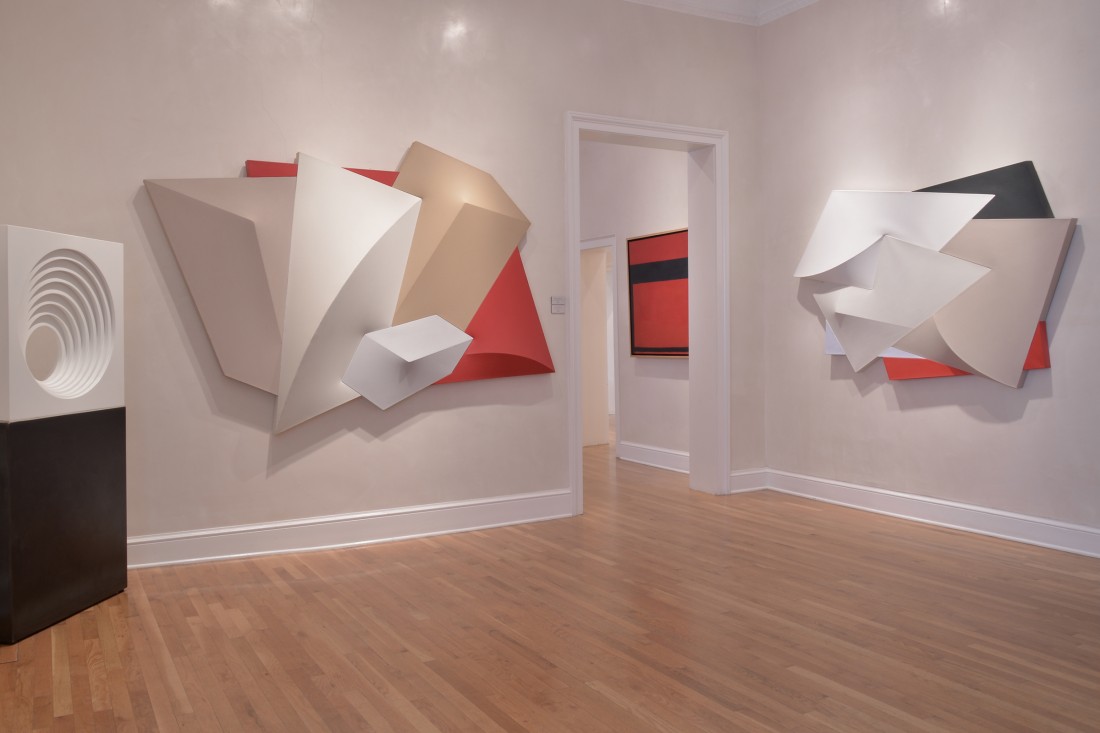 Peyton Wright Gallery is pleased to announce its premiere exhibition of works by Charles Hinman. The show features a selection of works indicative of Hinman’s long and pioneering career in the arts. In a recent review, a writer for The Brooklyn Rail praised Hinman’s “inexorable commitment to a single idea” Indeed for decades, he’s defined his singular practice with his stretched and shaped canvases. Using a palette of densely applied, matte color, Hinman paints angular, three-dimensional shaped canvases, creating areas of dynamic contrast. Jutting out from the walls, the works form multitudinous shadows, which change dramatically depending on where the light hits them.

Hinman began his career as an artist in 1964, and soon was showing at Sidney Janis Gallery and later at the Richard Feigen Gallery, both in New York City. In 1965, he was included in the historic Young America exhibition at the Whitney Museum. Also in 1965, Hinman’s work was featured in the seminal exhibition Shape and Structure, alongside Carl Andre, Robert Morris, Donald Judd, and others. Writing for Art in America, Lilly Wei observed that “with Hinman, what you see might be what you see, but it will be more than what you see at first. He requires time from his viewers…you should give it to him; it will be time well spent.”

Charles Hinman was born in Syracuse, New York on December 29, 1932. He earned a Bachelor of Fine Arts from Syracuse University in 1955. He studied at the Art Students League from 1955 to 1966, then served in the United States Army from 1956 to 1958. Hinman taught painting and engineering drawing at Staten Island Academy, New York from 1960 to 1962, and at Woodmere Academy from 1962 to 1964. Among his numerous distinctions, Hinman is a four-time recipient of the Pollock-Krasner Foundation Grant, and a 2012 recipient of the Guggenheim Fellowship. His work is included in public and private collections of national and international stature, including the Museum of Modern Art, New York; the Whitney Museum of American Art, New York; the Los Angeles County Museum of Art, Los Angeles; the Hirshhorn Museum and Sculpture Garden, Washington, DC; the Albright Knox Art Gallery in Buffalo, New York; the Museum of Modern Art, Nagoaka, Japan; the Tel Aviv Museum, Tel Aviv, Israel, and many more.