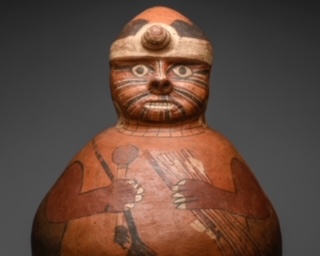 Inquire Enlarge
Warrior Effigy
200 BCE- 600 CE
31.5" x 18.5" x 19"
Ceramics, Terra-Cotta and pigment
Region: Peru
Culture: Nasca Culture
Ceramic drums with central, bulging sounding chambers were made in southern Peru at the turn of the first millennium. Among the most elaborately finished are those of Nasca style. They were surfaced with the many rich colors commonly used on Nasca ceramic vessels. A favored form was one in which a fat-bodied figure was worked into the shape of the instrument, the rotund body spreading out equally on all sides and the legs drawn up in the front. The figure is depicted atop the wide mouth of the drum, over which a skin would have been stretched.