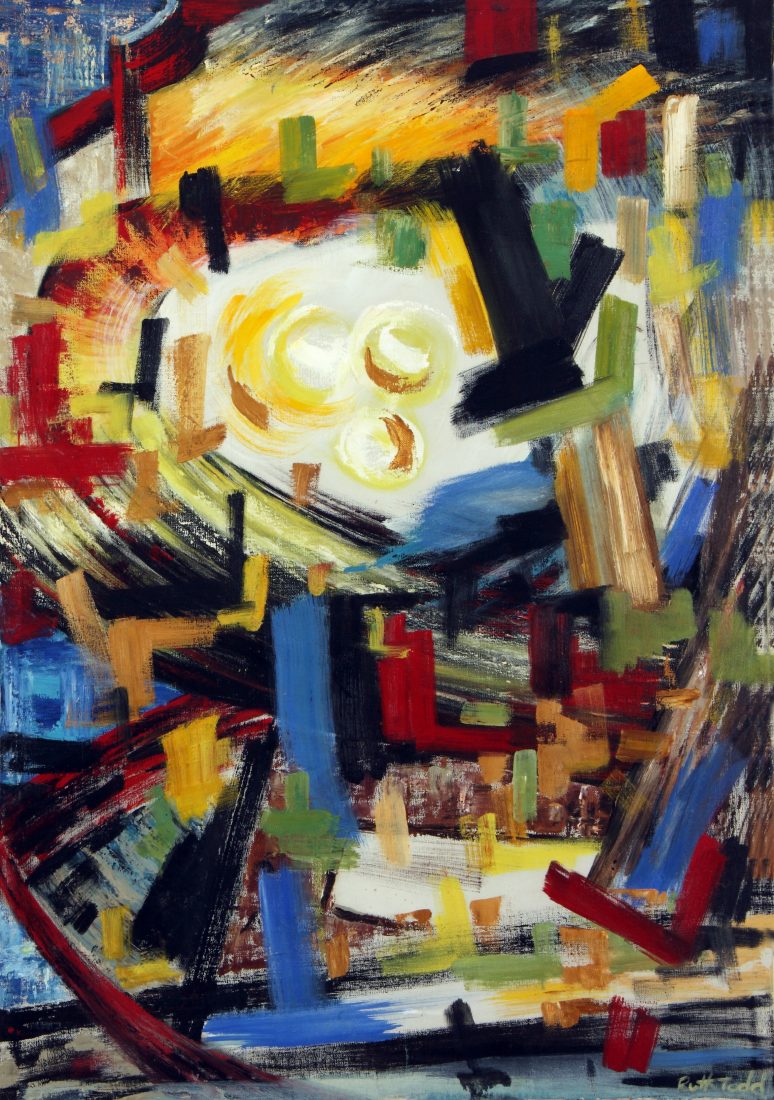 Ruth Todd
“Art today is not just an expression of Beauty alone, it is an extension of one’s self. It is a fundamental form of human symbolism. My search for Beauty and Truth in Art is in the mind – as well as in the knot in the weathered wood or the knot-hole itself…” –Ruth Todd

Born in 1909 in North Carolina, Ruth Todd, nee Thomas, started painting when she was 10 years old. She evolved into an inventive, Colorado Modernist artist who created abstract paintings using wood chips, sawdust, paint rags, sand, and pebbles. By the late 1950s and early 1960s, Todd was at the forefront of the Colorado avant-garde, shattering the classic perceptions of a woman artist. Developing many styles throughout her long career, Todd garnered high praise from Denver’s artistic community, as well as gaining national attention.

After high school, Ruth Todd attended Anderson College in South Carolina for two years (c.1928-1929), receiving a Certificate of Proficiency in Typewriting in May of 1929. In 1932, she attended the University of Miami for a year, where she met her future husband, Littleton Todd. She moved to New York City in 1933 to model, but her career was cut short when she became ill with Tuberculosis. While in New York, she also attended classes at the Art Students’ League. She moved to Miami and married Littleton in 1934. By 1937, however, her Tuberculosis had progressed and in May 11, 1937 she noted, “I left for [a] New Mexico Sanatorium in Albuquerque on a stretcher—I was bed fast for 2-1/2 years.” Littleton Todd was drafted into the army c.1943 due to World War II and was stationed overseas. Ruth remained in New Mexico until he was discharged in 1945.

In 1946, Ruth and Littleton moved to Colorado due to Ruth’s continuing ill health, resulting in another two and half years of convalescence at Swedish National Sanatorium. After years of Tuberculosis complications, she was finally cured. In 1953 she briefly studied at the Colorado Springs Fine Arts Center under the tutelage of renowned Abstract Expressionist Robert Motherwell. Also in 1953, Todd traveled to Europe to study art and to paint. Meanwhile, Mr. Todd opened a design studio in Denver where he manufactured and sold modern furniture. It was in his wood shop that Mrs. Todd would obtain much of the materials for her abstract works.

In the mid 1950s, Ruth Todd began to focus her attention on experimentation, creating highly textured paintings. Rather than using paintbrushes, easels, and canvas, Todd’s method consisted of mixing oil paints with sawdust and then manipulating the mixture on a vertical piece of Masonite. Todd believed that texture added richness to her work. During this period she often used combinations of black, white, and red.

Around 1957, Todd was entertaining a large group at her home and she was in immediate need of a large coffee table. Remembering an oversized painting she had made—one too large to hang on her wall—she decided to convert it to a table. Mounted on a wood frame, and covered in glass, her guests were so impressed with her ingenuity that she decided to start building coffee tables out of her abstract paintings. She began framing her Masonite pieces, and setting them in wrought-iron tables. She then attached brass legs to the bottoms, creating a utilitarian piece of art. She and her husband opened Occasional Furniture, Inc., located at 3606 E. Colfax Ave., where she designed, built, and sold her tables. In July of 1958, her tables were featured in Habitat magazine, a Brazilian interior-design publication.

In 1959, five of her abstract works were hung in a courtroom at the District Court in Littleton Colorado. District Judge H.H. Harrison removed portraits of Governor Steve McNichols and President Eisenhower because he “didn’t want political implications in his court room.” He therefore opted to hang Ruth Todd’s abstract paintings in spite of the controversy that such paintings might inspire, which they did. Many of the onlookers were not prepared for the avant-garde nature of her work, especially on view in a public building.

Toward the end of the 1960s and into the 70s, Todd used glue and raw linen, along with her sawdust and oil technique, to create abstracted figural works. In the mid 1970s through 1985, she gave up her art career to care for her ailing husband. After Littleton’s death, she began creating highly texture collages using wood, paneling, bark, and weathered elements. She continued to create art until her death in 2006.

Ruth Todd had twelve, one-woman shows, including two in New York City, as well as the International House in Denver, and the University of Colorado, Boulder. She exhibited in over 24 major museums and art galleries, and her art was featured in The Arts, Art News and, The New York Herald Tribune, among others. She is in the permanent collection of Kirkland Museum of Fine and Decorative Art, Denver.

view all works by Ruth Todd