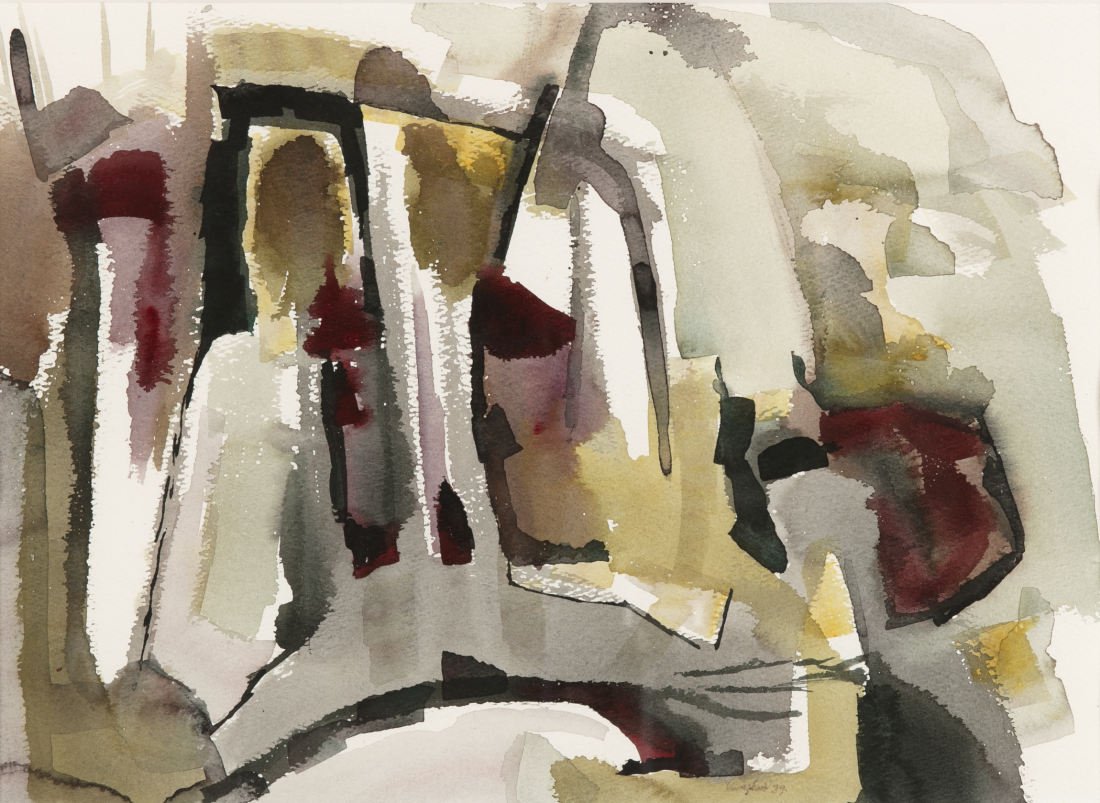 William Lumpkins, one of the only early modernists native to New Mexico, was born on a ranch west of Clayton, New Mexico. As a young boy, Lumpkins saw a man demonstrating painting techniques in the window of a hardware store in Holbrook, New Mexico, and decided that he wanted to be an artist. In 1929, he enrolled at the University of New Mexico to pursue a career in architecture. During this time, he took a portraiture class from the Swedish artist Nils Hogner, where he met many young modern artists, such as Cady Wells. These artists first introduced Lumpkins to the notion of art not only as means of representing the physical world, but as a vehicle of personal expression through line and color. In 1930, Lumpkins viewed an exhibition of New Mexico watercolors by the artist John Marin. Marin’s semi-abstract landscapes had a profound impact on Lumpkins, whose work was already developing toward abstraction.

In 1934, Lumpkins received his degree in architecture from the University of Southern California. In the following years, he worked as a junior architect for the Works Project Administration. In 1938, he returned to Santa Fe. Upon his return, he began to befriend many of the early New Mexico modernists, such as Jozef Bakos, Willard Nash, and B.J.O. Nordfeldt. He developed a particularly devoted friendship with the artist Raymond Jonson, who shared his passion for the expressive possibilities of abstract work. That same year, Jonson and Emil Bisttram founded the Transcendental Painting Group, a group of artists whose shared vision was to transcend material reality and advance the expression of spirituality in art through the creation of non-representational work. Lumpkins soon became a member. The Group included Agnes Pelton, Lauren Harris, Ed Garman, Robert Gribbroek, Florence Miller Pierce, Stuart Walker, and Horace Towner Pierce. During this time, Lumpkins was also associated with
Los Cinco Pintores, a group which met in local cafes in Santa Fe and included Willard Nash, Walter Mruk, Fremont Ellis, Will Schuster and Josef Bakos.

Lumpkins is well-known in Santa Fe, not only for his participation in several of the most prominent artistic movements in New Mexico, but also for his innovation in architecture and solar technology. In 1935, he built his first passive solar house at Capitan. In 1972, he found Sun Mountain Design, a group of influential solar activists responsible for the solar demonstration center at Ghost Ranch, north of Santa Fe.

After World War II, Lumpkins lived for a time in California, before returning with his wife and children to Santa Fe in 1967. In 1985, he founded the prestigious Santa Fe Institute of Fine Arts. He continued to live and work in Santa Fe until his death in 2000.

Lumpkins’ paintings, both representational and abstract, exhibit a unique mastery with the medium of watercolor. According to Lumpkins, his “paintings are all developed through quiet meditation, following the reading of Zen koans” – short statements to provoke contemplation (Wiggins 1990; 17). Many of the titles of Lumpkins’ works are derived from these koans. The works poignantly communicate emotion and mood with a powerful eloquence of expression through shape, color, and space.