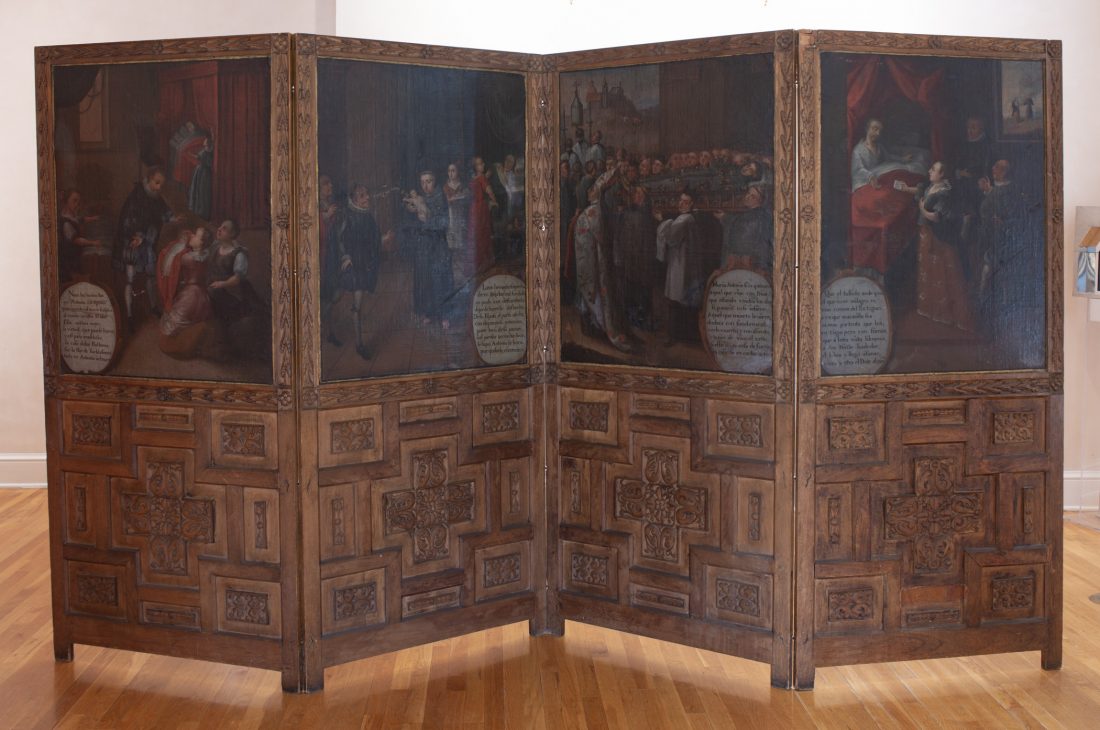 Inquire Enlarge
The Life of Saint Anthony of Padua
c. 1750
72" x 192"
Painting, Sculpture, Furniture, Objects, Oil on canvas on wood
Region: Mexico
The culture of New Spain was marked by fascination with the beautiful and foreign goods of Japan. This interest, combined with powerful purchasing power, led to the importation of Japanese folding screens known as byōbu. However, Mexican artists soon began to exercise their creativity by making a whole new genre of folding screens that combined European, indigenous, and Japanese elements. These folding screens were the highest of fashion and filled the homes of the wealthy. They were often found in upper class salons where the hosts would welcome their friends and drink Mexican chocolate in their finest clothes surrounded by breathtaking artworks. Painted onto four panels this colonial Mexican folding screen, or Biombo, tells the story of Saint Anthony of Padua. The upper portion of the screen shows four scenes, each one marking an event in Saint Anthony's life and accompanied by excerpts in Spanish. Painted in a vibrant, European style, the love and care the artist paid to his subjects is evident. The back of the screen is bursting with color in a cacophony of pink, white, and red flowers on a red background. The dense tropical hardwood is richly carved and reminiscent of Spanish mudéjar geometric style dating back to a Muslim-ruled Spain.

The first panel depicts the birth of Saint Anthony into a wealthy Portuguese home in Lisbon in the thirteenth century. The scene depicts two maids presenting the infant to his father while another maid prepares the cradle behind his father. His mother is in childbed assisted by a maid. The second panel shows the infant child speaking to his father the words, "Yes, you are my father." This miracle of speech is a metaphor for Saint Anthony's later fame as a gifted speaker. He was known for being a compelling and holy orator, and, after his death, his tongue was preserved as a relic for the miracle that it remained "fresh" while the rest of his body decayed. In the background one maid holds a mancerina and molinilla, a special chocolate cup and whisk from which the wealthy drank their Mexican chocolate. The third panel shows Saint Anthony's death procession. He is carried by fellow Franciscan clergyman and Pope Gregory IX, the same pope that would canonize him less than a year later. The last panel depicts two men and a woman handing a man a small book or letter. It is said that upon Saint Anthony's death, many of those suffering ailments, including the blind, were cured. This depicts a blind man regaining his sight upon the saint's death and is being handed a letter to read.