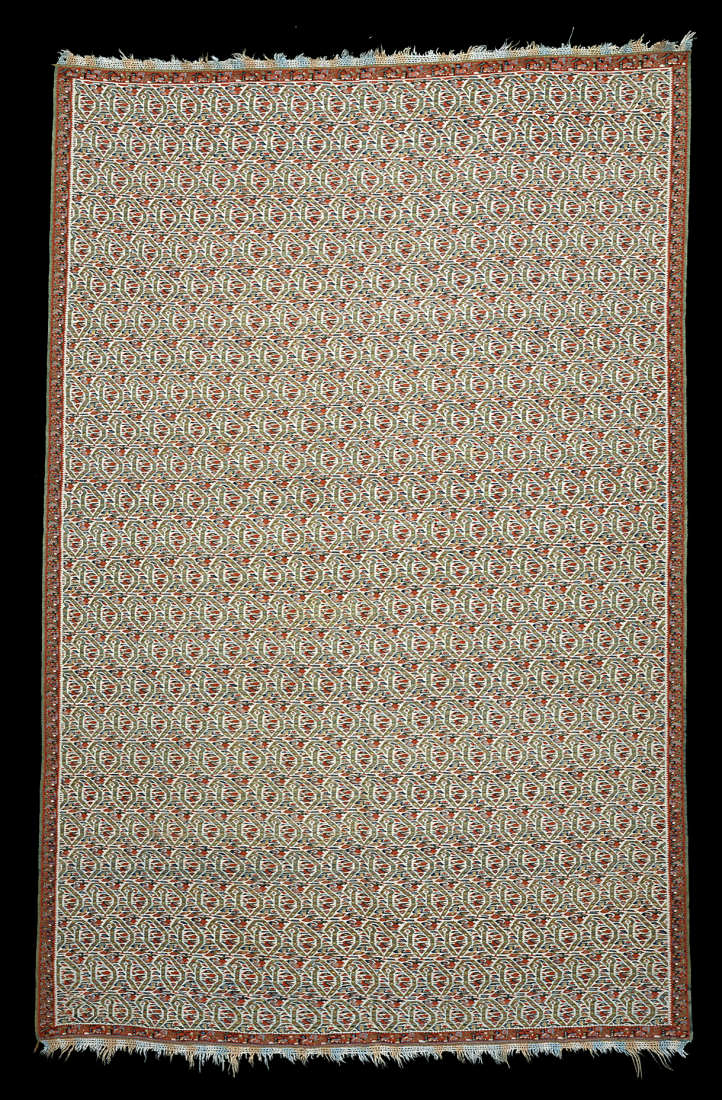 Inquire Enlarge
Senneh Silk Foundation
61" x 41"
Textile, Wool, silk
Region: Senneh, Kurdistan
Since the reign of the Safavids, and particularly from the seventeenth century onward, Sanadaj has been the seat of the governor of Kurdistan. The name derives from seneh dezh, which means “three fortresses”. The kilims of Sanadaj have achieved renown under the name of Senneh for centuries. The Safavid kilims must be considered precursors to the Senneh kilims, for a great many features of the Safavid kilims can be found in them. The delicacy and tightness of weave in these kilims, as well as their patterns and designs, bear out such a relationship. It seems that the role played by Tabriz (the first capital of the Safavids) in the production of the royal kilims was turned over to Sanandaj when the Safavid dynasty ended.

The term Fath ‘Ali Shahi kilim, which is prevalent in the rug markets of Iran, applies to a group of the finest Senneh kilims. These kilims, which are generally woven small with the dimensions of a prayer rug (1 x 1.5m / 3.25 ft x 5 ft, known as the zaro nim format), are so fine and delicate that some of them can be folded and put away in a pocket despite the fact that only their warps are of silk, while their wefts are entirely of wool. The kilims known as the Fath ‘Ali Shahi have also been called the seven color (haft rang) kilims by virtue of the fact that their warps are multi-colored batches.

The pattern of Senneh kilims generally consists of repeated bottehs motifs. This design, which must have been particularly attractive to the Qajar court, can be seen on most weavings and fabrics produced throughout the nineteenth century and in the early years of the twentieth, including rugs, shawls, and qalamkars. Many of the Senneh kilims were woven as prayer rugs and therefore are in the zaro nim format or larger. The surface of the mehrab or niche in these rugs is generally adorned with the botteh pattern; sometimes this motif is used as far up as the spandrel. Another common pattern is Senneh kilims was the moharammat. This pattern, comprising narrow vertical or diagonal stripes, was a fairly prevalent one, and variations can be seen in other textiles. The pattern forms the mehrab in some Senneh kilims, with the spandrels aboce adorned with small gols or else with bottehs.

The weave structure generally used in the Senneh kilim is inclined slit tapestry with eccentric weft. Aside from prayer rugs, other kilims have been woven in Senneh with different designs and compositions. The majority of the kilims are called commissioned (sefareshi), which refers to the fact that they were commissioned by the governors of Kurdestan and sent as gifts to the Qajar court or officials. These “commissioned” kilims were not woven for everyday use of the Kurds. The term workshop kilim, which is applied to the Safavid kilims and others produced by master craftsmen, would not describe those of Senneh, however, for it was women at home who wove these kilims. Senneh was also a center for the production of very delicate kilims like those which shared all the characteristics of its kilims.

Larger, more elaborate kilims were also woven in Senneh. While these kilims were not as delicate as those which were commissioned, they boast the same designs and colors.

Apart from the commissioned kilims of Sanadaj itself, there were areas close to the town where more everyday kilims were made in great number. While these kilims do not measure up to their superior counterparts in terms of delicacy, they share patterns and weaves. In order to distinguish between these kilims and the commissioned variety, they are referred to as Senneh-area kilims.