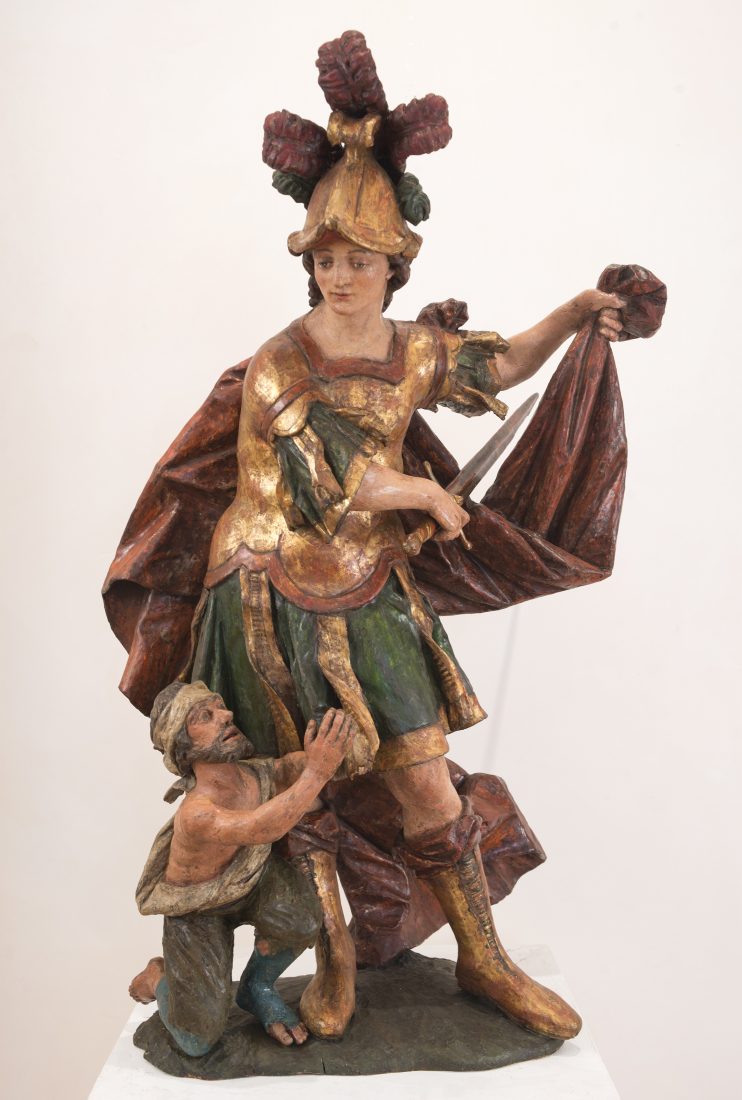 Inquire Enlarge
Saint Martin of Tours
c. 1700
40.5" x 25" x 18"
Bultos, Giltwood, gesso
Region: Mexico
San Martín de Tours (Latin: Sanctus Martinus Turonensis; 316 or 336 – 8 November 397) was Bishop of Tours, whose shrine in France became a famous stopping-point for pilgrims on the road to Santiago de Compostela in Spain. He has become one of the most familiar and recognizable Christian saints, sometimes venerated as a military saint. As he was born in what is now Szombathely, Hungary, spent much of his childhood in Pavia, Italy, and lived most of his adult life in France, he is considered a spiritual bridge across Europe.

His life was recorded by a contemporary, the hagiographer Sulpicius Severus. Some of the accounts of his travels may have been interpolated into his vita to validate early sites of his cult. Conscripted as a soldier into the Roman army, he found the duty incompatible with the Christian faith he had adopted and became an early conscientious objector.

He is best known for the account of his using his military sword to cut his cloak in two, to give half to a beggar clad only in rags in the depth of winter. While Martín was a soldier in the Roman army and stationed in Gaul (modern-day France), he experienced a vision, which became the most-repeated story about his life. One day as he was approaching the gates of the city of Amiens, he met a scantily clad beggar. He impulsively cut his military cloak in half to share with the man. That night, Martín dreamed of Jesus wearing the half-cloak he had given away. He heard Jesus say to the angels: "Martín, who is still but a catechumen, clothed me with this robe." (Sulpicius, ch 2). In another version, when Martin woke, he found his cloak restored to wholeness. The dream confirmed Martin in his piety, and he was baptised at the age of 18.

The part kept by himself became the famous relic preserved in the oratory of the Merovingian kings of the Franks at the Marmoutier Abbey near Tours. During the Middle Ages, the supposed relic of San Martín’s miraculous cloak, (cappa Sancti Martini) was carried by the king even into battle, and used as a holy relic upon which oaths were sworn. The cloak is first attested in the royal treasury in 679, when it was conserved at the palatium of Luzarches, a royal villa that was later ceded to the monks of Saint-Denis by Charlemagne, in 798/99.

He is most frequently depicted on horseback, dividing his cloak for a beggar. This fine sculpture is an exception: Martín stands over the supplicant, drawing his sword in preparation. He is popular around the world, and is known as the patron saint of beggars, innkeepers, vintners, and horsemen, among other things. He is particularly popular in the New World, and in Mexico he is considered beneficial to shopkeepers.