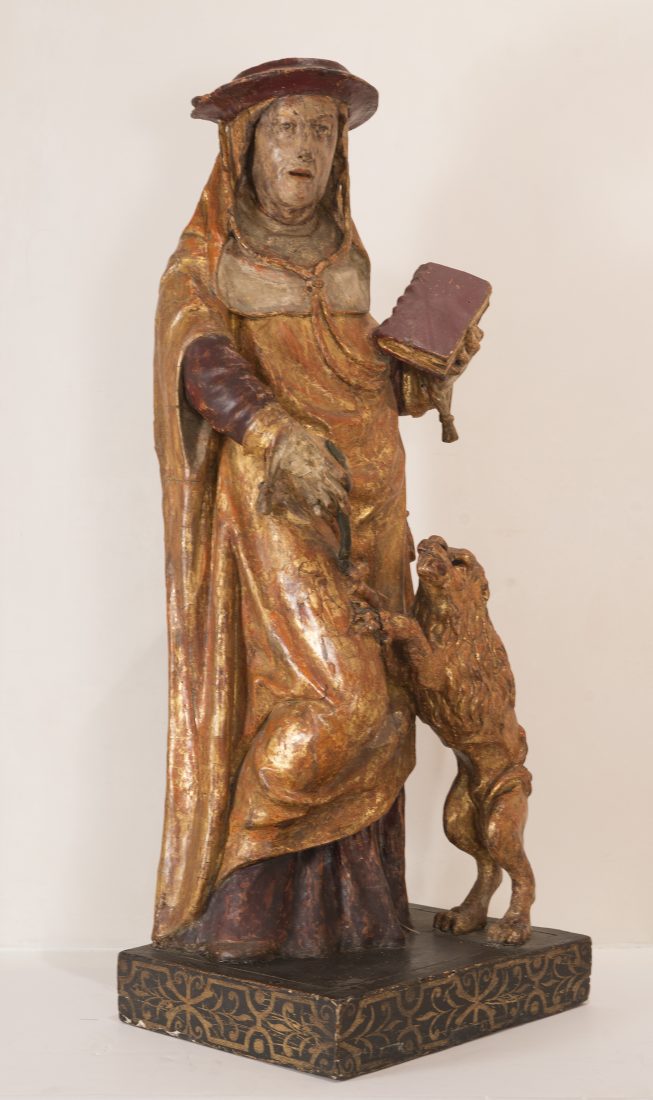 Inquire Enlarge
Saint Jerome
c. 1700
35.5" x 15" x 11"
Bultos, Giltwood and gesso
This fine Mexican sculpture depicts Saint Jerome (c. 347 – 30 September 420), widely revered as a priest, confessor, theologian and historian. He was the son of Eusebius, born near Emona on the border of Dalmatia and Pannonia, then part of northeastern Italy. He is best known for his translation of most of the Bible into Latin (the translation that became known as the Vulgate), and his commentaries on the Gospels. His list of writings is extensive.

The protégé of Pope Damasus I, who died in December of 384, Jerome was known for his teachings on Christian moral life, especially to those living in cosmopolitan centers such as Rome. He is recognised as a Saint and Doctor of the Church by the Roman Catholic Church, the Eastern Orthodox Church, the Lutheran Church, and the Anglican Communion.

In art, he is often represented as one of the four Latin doctors of the Church along with Augustine of Hippo, Ambrose, and Pope Gregory I. As a prominent member of the Roman clergy, he has often been portrayed anachronistically in the garb of a cardinal. He is seen here wearing a cardinal's hat. Even when he is depicted as a half-clad anchorite, with cross, skull and Bible for the only furniture of his cell, the red hat or some other indication of his rank as cardinal is as a rule introduced somewhere in the picture. During Jerome's life, cardinals did not exist. However, by the time of the Renaissance and the Baroque it was common practice for a secretary to the pope to be a cardinal (as Jerome had effectively been to Damasus), and so this was reflected in artistic interpretations.

He is also often depicted with a lion, as seen here, in reference to the popular hagiographical belief that Jerome had tamed a lion in the wilderness by healing its paw. The source for the story may actually have been the second century Roman tale of Androcles, or confusion with the exploits of Saint Gerasimus (Jerome in Latin is "Geronimus"). Hagiographies of Jerome talk of his having spent many years in the Syrian desert, and artists often depict him in a "wilderness", which for West European painters can take the form of a wood or forest.

He is also sometimes depicted with an owl, the symbol of wisdom and scholarship. He is seen here holding a book. Writing materials and the trumpet of final judgment are also part of his iconography.