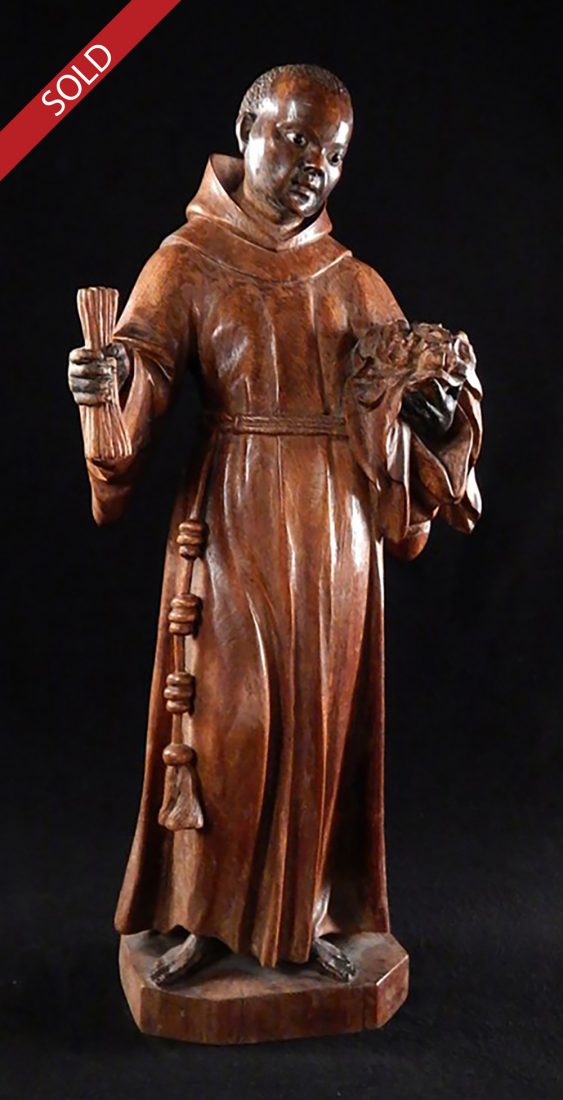 Inquire Enlarge
Saint Benedict of Palermo
c. 1725
24.5" x 12.5" x 6.5"
Bultos, Wood
Region: Mexico
During the third Council of Trent in 1564 Pope Pius IV decided to disband the hermit societies, whereupon he encouraged their communities to join the Franciscan orders. When Benedict became a member of the Order of Friars Minor he was sent to Palermo, to the Franciscan Friary of St. Mary of Jesus. Benedict rose through the Order, first starting as a cook and advancing to Master of Novices, and eventually to Guardian of the Community. While he remained illiterate throughout his life and was never ordained a priest, Benedict as a lay brother continued drawing people to hear his teachings of the Scriptures and to experience his professed healing abilities. After years of service elsewhere in the Friary, Benedict returned to the kitchens because he enjoyed cooking. Benedict was known for his resourcefulness in feeding more people despite a limited amount of available food. Having suffered persecution throughout his life due to being “il Moro,” or dark skinned, Benedict is remembered for his racial tolerance.

Benedict died at the age of sixty-five on April 4, 1589 near Palermo, Sicily, where he was buried in a large tomb in the Friary church. Soon after his death, Benedict became the patron of Palermo. In 1592 Benedict’s body was exhumed, allegedly without signs of decay. In 1611 King Phillip III of Spain added a shrine for Benedict near the Santa Maria de Gesu in Palermo, Italy, at which time Benedict’s body was again exhumed and to be placed in the shrine. In 1743 Benedict was beatified by Pope Benedict XIV, and in 1807 he was canonized by Pope Pius VII. While his exemplary life yielded enough cause for his sainthood, he also came to illustrate the inhumanity of the slave trade. Benedict’s feast day is celebrated on April 4th.