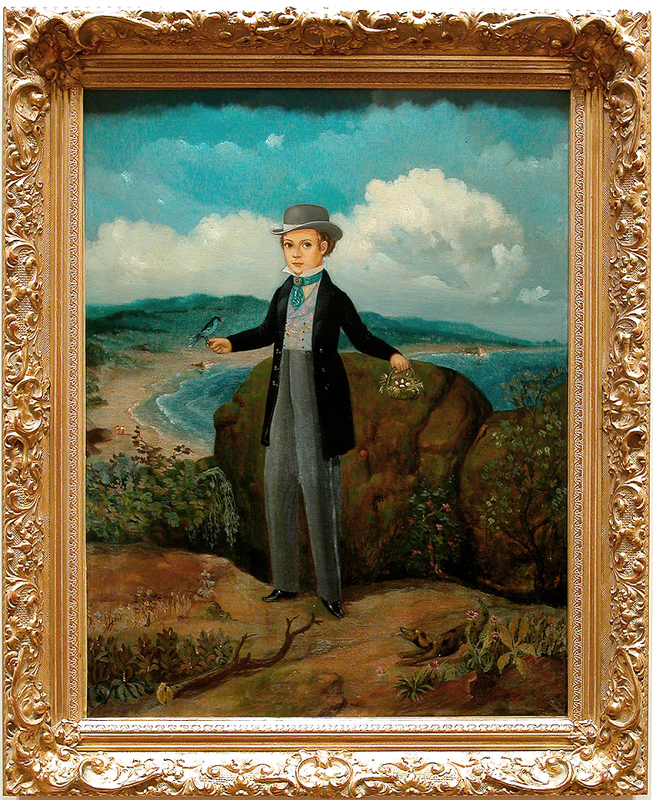 Inquire Enlarge
Pair of Portraits: Boy & Girl
1937
23.12" x 17.5" Framed: 29" x 23.5"
Painting, oil on canvas
Region: Mexico
Signed lower right
Horacio Rentería Rocha oil paintings are mostly small panels representing idealized and magnificently dressed children. Typically, these are surrounded by beautiful Mexican cultural objects such as for example Piñatas. Pets, especially dogs and cats, are also frequently depicted with the children in the oil paintings. This is shown in his works with the children at their most beautiful moments of the game. Often, the magnificently dressed children are embedded in romantic landscapes. The composition of human figures within beautiful regional landscapes often occurs and gives his paintings a homely touch/soul. Especially mountains, hills, volcanoes, striking buildings such as churches and streets of his domestic surroundings/life were artistically included. The traditional customs of the people play a special role in his paintings and convey unity between tradition, social customs and human beings. Horacio Rentería Rocha had a passion for light, clean lines and shapes which are mirrored in his landscape paintings. His vision of a pure nature with children in magnificent costumes from their cultural heritage away from the constraints of modern civilization with its excitement and joy, is reflected by the high-contrast clarity in his paintings.

Horacio Rentería Rocha was born on the 21'st of October 1912, under poor conditions, in the district of Analco of the Mexican city Victoria de Durango, where he later completed elementary and middle school. Already in his childhood, he painted on house facades of his hometown with clay, lime and pieces of burned coal.

After completing his Bachelor in Mathematics at the Juárez University, he worked as a French - and Spanish teacher in Durango and in Gomez Palacio. At the age of only 17, he married the 30 year-old Blanc Socorro from his hometown and had two children with her. Because he could barely cover the necessary expenditures with his meagre salary as a primary school teacher of languages, he additionally taught mathematics and constructive drawing. During this time he seriously started with his art work. Among other things, he painted the magnificent wall painting at Guadelupe Victoria high school in Durango in 1932, as a student of the famous painter William des Lourdes.

In the early 1930s he became a widower and continued the path as an artist consistently. He gave up his position as State (official) teacher and hoped for an improvement of his financial resources through his art.

In 1940 he received a scholarship to study the art of painting at the Art Academy of San Carlos by General Lazaro Cardenas. He met his future wife Elisa Coronado in 1943. The couple had ten children during the course of their life together.

In 1943 he moved to Mexico City with Elisa. However, after a short stay in Mexico City the couple was forced to return to their hometown of Durango, due to the modest income. Horacio Rentería Rocha hoped to receive moral support for his artistic work in Durango.

Unfortunately, after about two years in Durango, in 1945, the couple moved for the second time to Mexico City. Now Horacio Rentería Rocha devoted more time than ever on his painting. During his artistic career in Mexico City he met the art dealer Agapito Engels in1948, who would influence and contribute to the myth-making surrounding Horacio Rentería Rocha's life and work.

In 1960 he moved with his family to the city Guerro, State of Taxco, where they lived for eight years. His artistic work took him in 1968 to the Central Mexican metropolis of San Luis Potosi.

A short time later, the family moved again (for the third time) to Mexico City. After a long illness, Horacio Rentería Rocha died at the ISSSTE hospital in Mexico City on the 3'rd of March 1973 from kidney complications, caused by his diabetes. About half a year before his death, 1972, he married Elisa - his long-time partner and mother of his 10 children. Of their ten children, two daughters, America and Bertha, went to the Federal Republic of Germany.