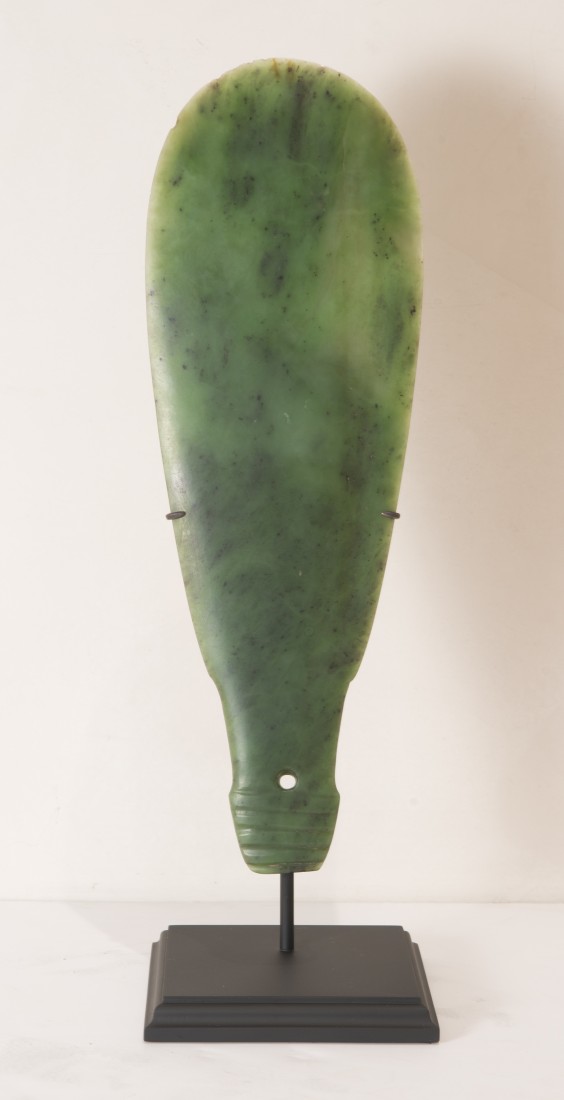 Inquire Enlarge
Mere Pounamu
c. 1850
14.25" x 5"
Ceremonial Objects, Objects, Nephrite jade (greenstone)
Region: New Zealand
Culture: Maori
The mere is a type of patu, a short,  broad-bladed weapon usually made of stone, bone, or wood. The mere is made from nephrite jade, called greenstone or pounamu. It is one of the traditional, close combat, one-handed weapons of the indigenous Māori of New Zealand and a symbol of chieftainship.

Generally, short clubs had holes carved or drilled through the butt end of the handle, allowing a wrist cord (tau or patui) made of plaited New Zealand flax, or Polynesian dog skin, to be passed through and attached to the wielder's wrist. Passing the wrist cord over the thumb and around the hand prevented the club from slipping during use.

The pounamu used to make a mere was carefully chosen to be flawless and to have a good color. A block of greenstone was first rough cut using pieces of quartzite combined with sand and water. Dressing of the surface was done with fine sandstone and pieces of very hard smooth stone. Due to the toughness of greenstone, mere pounamu were able to be made thinner than other similar patu made from stone, however this made the process of manufacture slow and arduous. The creation and finishing of a mere pounamu is claimed to have sometimes taken more than one generation to complete. A mere pounamu was much harder than a patu of wood or bone, and much tougher - less likely to fracture - than a patu onewa of any other type of stone.

Pounamu was highly prized by Maori and the mere pounamu, as the weapon of a chief or rangatira, was the most revered of all Maori weapons. These mere were passed through generations; they were given names, and were said to possess a spiritual quality or mana of their own. Particularly special mere were imbued with magical powers, or supernatural qualities. Due to the high value placed on revered mere pounamu they would often be hidden when not in use, and kept in specially constructed cases. Considerable efforts were undertaken, often by an entire tribe, to recover or regain significant mere that were lost or stolen. Mere were buried with their chiefly owners, but were considered so valuable that they were later recovered from the grave. It was considered an honor to be killed by a specially significant mere pounamu. Captives would sometimes volunteer their own mere pounamu as their means of execution rather than be killed by a lesser weapon. Gifting such a valuable item was common as a sign of good faith and respect, and it retains this symbolic importance today.