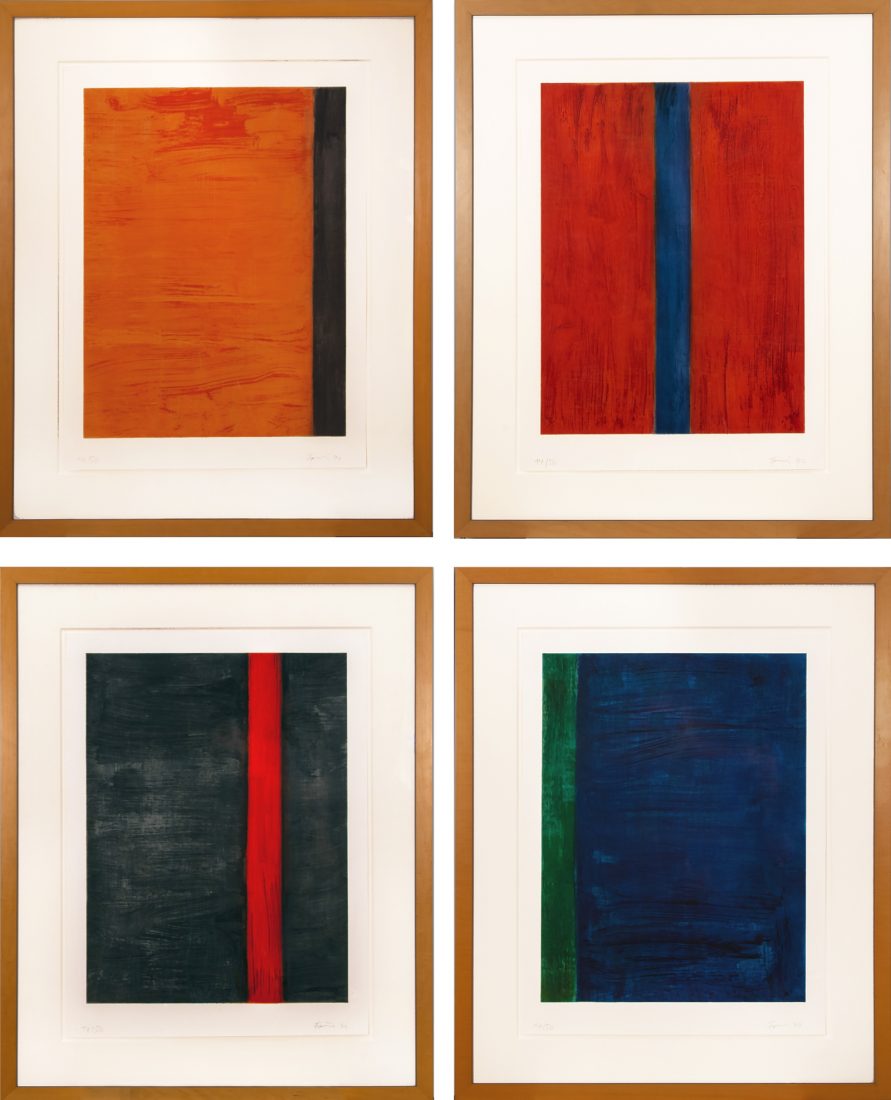 Born in 1952 in Füssen, Germany (in the Allgäu region), Günther Förg was a prolific painter, sculptor, graphic designer, and photographer whose daring conceptual works incorporate and critique tropes of the sprawling movement known as Modernism. His multidisciplinary oeuvre comprises a series of ambitious, sustained investigations into new materials and philosophies. Förg tirelessly engaged the intellectual context of 20th-century art-making, creating deft and witty reactions to the Minimalism of Kazimir Malevich, the figuration of Paul Klee, the formal abstraction of Blinky Palermo, and the Expressionism of Clyfford Still and Mark Rothko. In so doing, he left behind an oeuvre that defies easy categorization.

His career began in the early 1970s as a student at The Academy of Fine Art Munich. During his studies, Förg developed a practice grounded almost exclusively in grey and black monochrome. These early investigations into gray – also called ‘Gitter’ paintings – demonstrate the beginning of a lifelong commitment to conceptualism. As he stated, ‘Grey is nothing: not white, not black. Something in between. Not concerned with the figure. Something free.’ While the artist later incorporated color into his monochrome series, his use of gray represents a neutral foundation from which he conceived his oeuvre.

In the 1980s, Förg began utilizing photography, printing large-format images of culturally – and politically – significant architectural structures, from Bauhaus buildings in Tel Aviv to Fascist constructions in Italy. This diversification of material and form led Förg to abandon painting altogether, and for some years he pursued a purely photographic practice as a reaction against painting itself. He would later reflect that his use of photography was a method of ‘working closer to reality,’ stating, ‘what one paints is not reality.’

Throughout the 1980s and 1990s, his photographic works achieved critical acclaim and were exhibited at major museums internationally, including the Kunsthalle Bern in Switzerland and The Solomon R. Guggenheim Museum, New York NY. During this time, Förg also began experimenting upon the exhibition space itself, painting over the gallery walls, and positioning photographs against his own paintings.

Förg entered a new phase of experimentation in the late 1980s, which brought him back to painting, but also included the embrace of new materials for him, such wood, copper, bronze, and lead. In the early 1980s, Förg made his so-called Alubilder – assemblages of aluminium sheeting onto which the artist had painted linear patterns or portrait photographs. Förg’s renowned lead series dating from the 1980s and 1990s – acrylic painted on sheets of lead and supported by wooden frames – blurs the line between painting and sculpture in an evolution towards object-making.


Also initiated during the 1980s, his bronze sculptural practice indicates a painterly quality, with indentations and marks that are reminiscent of a brushstroke, as he attempted to replicate a moment frozen in time.


From 1992 until 1999, he taught at the Staatliche Hochschule für Gestaltung in Karlsruhe. From 1999 on he was a professor in Munich. He had a home in Areuse, Switzerland, as well as in Freiburg. In 1993 he married artist Ika Huber.

In pursuit of further artistic experimentation Förg began producing fragmented body-part sculptures in the early 1990s, describing this arrival at figuration as inevitable. These new works embraced the materiality of their making; the heavy, weathered, and scratched surfaces of the sheets of metal, lead, and wood hint at something that is simultaneously formal and expressionist, geometric and free.

By the beginning of the 21st century, Förg’s paintings had left the formality of Minimalism behind. In a new direction, he incorporated a brighter palette and more expressive hand with a series of grid-like marks and intersecting colors. These paintings – called ‘Gitterbilder’ (grid paintings) – command a similar freedom of form and sensuality that has led to critical comparisons to Cy Twombly. Other works from this era portray vast canvases of negative space interrupted by colorful, gestural hatching and mark-making. Förg’s ultimate return to expressive painting indicates a completion of sorts – a full-circle arrival at painting as a synthesis of experimentation, rooted in art history.

In the artist’s own words, ‘I think painting is a resilient practice; if you look through the history of painting it doesn’t change so much and we always see it in the present. It is still now.’

Förg died on his 61st birthday on December 5, 2013 in Freiburg, Germany. Today, his works can be seen in collections of the Hamburger Bahnhof in Berlin, the Kunstmuseum Bonn, the Museum für Moderne Kunst in Frankfurt am Main, and the Museum of Modern Art in New York, among others.


view all works by Günther Förg