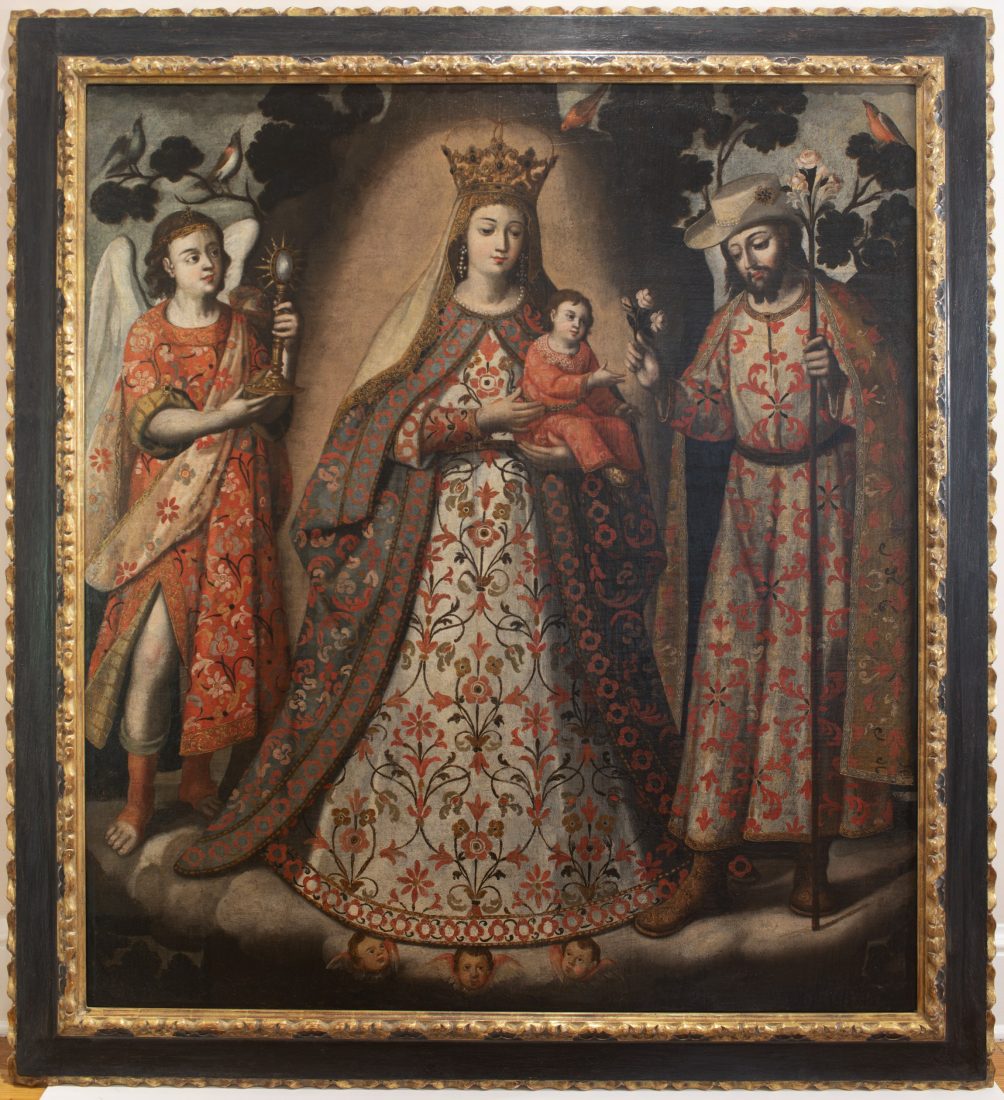 Inquire Enlarge
La Virgen de Valvanera
c. 1750
51.75" x 46" Framed: 61.25" x 55.37"
Painting, Oil on canvas
Region: Cuzco, Peru
Nuestra Señora de Valvanera, the patroness of the Rioja region of Spain, has been the object of a cult following and pilgrimages since at least the 15th century. The polychromed wood sculpture of her dating from the Romanesque period is enshrined in a Benedictine monastery at Valvanera.

According to the legend, the sculpture was carved by Saint Luke and brought to Spain in the 1st century. Saint Athanasius and a group of Christian ascetics who lived in the caves around Valvanera attributed special powers to the image and built a sanctuary to house it. When the Moors invaded Spain in 711, a man named Arturo hid the sculpture in the hollow of a tree to protect it, and the bark of the tree grew over the hollow to enclose the image completely. At a later date, a thief and murder named Nuño Oñez was about to rob a farmer, who prayed to the Virgin Mary. Oñez was struck by such contrition that he became a Christian hermit. One night he envisioned the Virgin of Valvanera in a tree that looked like a beehive, on a hill from which a spring flowed. The next day Oñez told the priest Domenico de Brieva of his vision and they went out to find the image. Indeed, they found, atop a hill, an oak tree that housed a swarm of bees and with a spring of fresh water at its base. They removed the image from its natural sanctuary, and the Benedictines who cared for the shrine after 1063 built a large monastery around it. The kings of Aragon and Castilla made the Virgin of Valvanera their special protector. Queen Isabel visited the shrine in 1492, and King Philip II sent a friend there to pray to the image on his behalf. The cult of the Virgin of Valvanera came to the Americas early on and was widely disseminated by devotees who established confraternities in her honor.