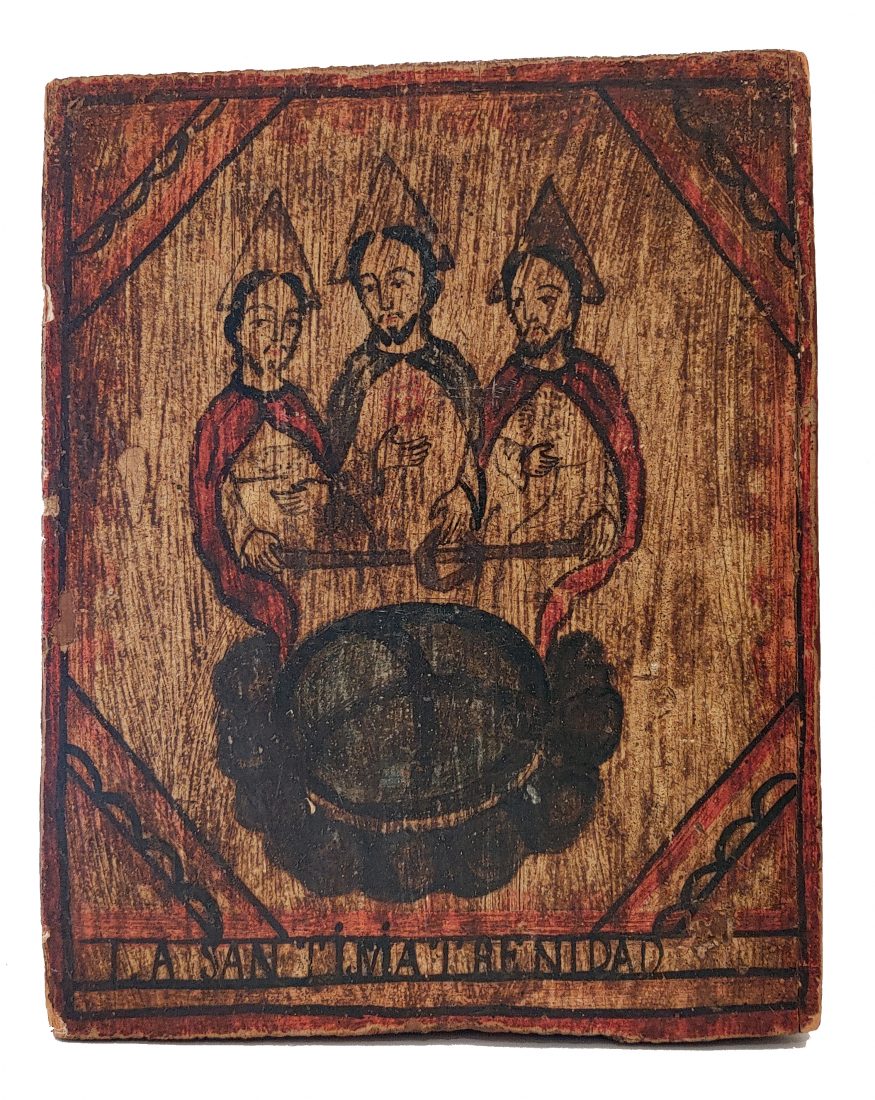 Inquire Enlarge
La Santisma Trenidad
ca. 1820
8" x 6.5" x .5"
Retablos, polychrome painted wood
Region: New Mexico
"It is classic Jose Aragon, ca. 1820 or so. It is, of course of the Holy Trinity, inscribed at bottom, -"San Tima Trenidad", because there was not enough room to inscribe "Santisima Trinidad". Aragon created a series of retablos in 1820 on which he included inscriptions at the bottom. This makes it more identifiable, since the writing is recognizable as such. The back is very interesting also. It appears he was probably practicing a scroll or design he was thinking of using." Marie Cash

José Rafael Aragón
José Rafael Aragón is considered to be one of the most prolific and highly regarded classic santeros in early New Mexico. Aragón produced miniature carvings, massive altar screens for area churches, and retablos depicting the popular saints of the era; all were strongly and sensitively rendered, with careful attention paid to detail. His works embody a more individual style than those of other santeros, who were often heavily influenced by orthodox religious iconography.

He was a wood carver who used local woods such as ponderosa pine or cottonwood roots and also a painter who used watercolor and tempera. For his woodcarvings, his method was to cover the carved object with gesso or plaster and then apply color with watercolor paints. He was especially noted for his creative decorative motifs, color contrasts, boldness of line and abstract forms. Much of his work was creating monumental altar screens, and he also supervised church-decoration projects and carved retablos. Evidence shows that he was active for nearly fifty years, from 1815 to 1862.

One of his first commissions, between 1818 and 1826, was the altar screen in the church of San Lorenzo at Picuris Pueblo near Santa Fe, where he used tempera paint. Around 1835, he moved to a new home in the village of Quemado, later named Cordova, New Mexico. He went there to be with his second wife, Josefa Cordova, whom he married after the death of his first wife. There he carved and painted in folk-art style the main altar of the Quemado Church of San Antonio, and this became one of many projects that built his reputation throughout the Santa Cruz Valley. He did work on most of the churches in the area including at Santa Cruz, El Valle, Truchas, Chimayo, Hernandez, and Pojoaque. He also worked in the Taos area.