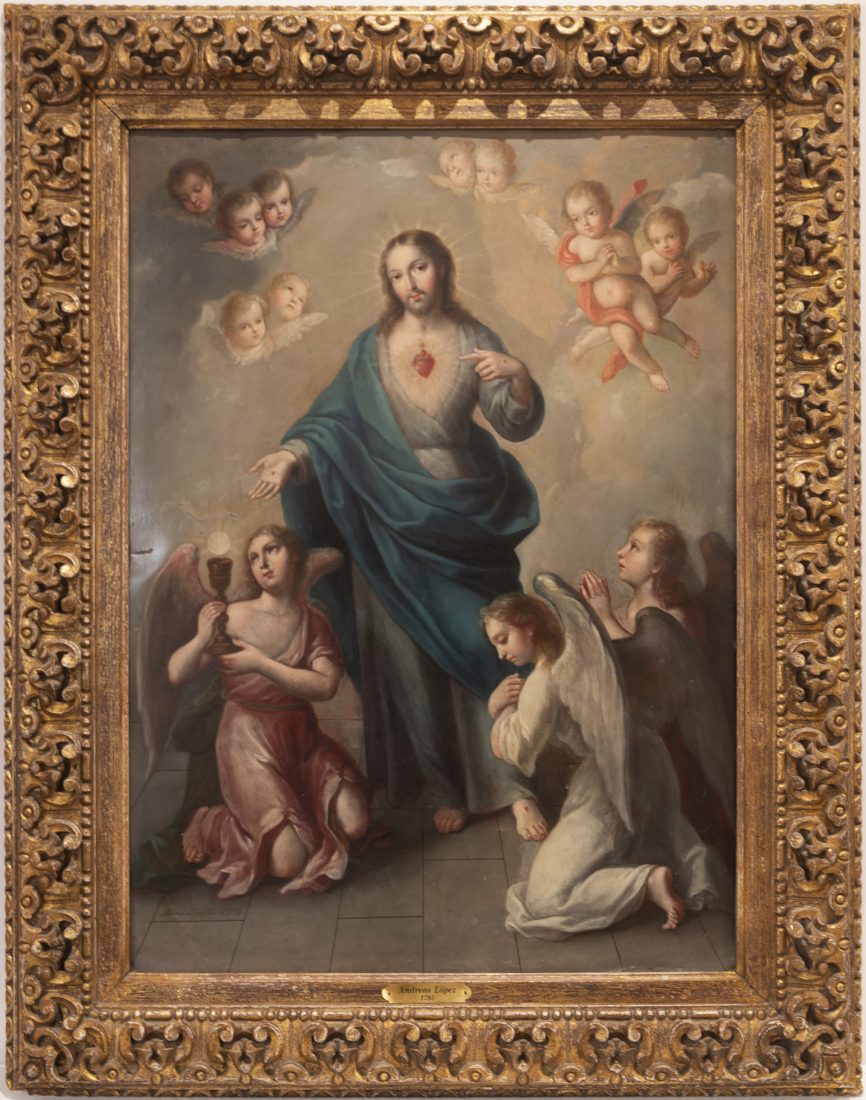 Inquire Enlarge
El Sagrado Corazón de Jesus
1795
34" x 25" Framed: 43" x 34"
Painting, Oil on copper
Region: Mexico
Signed and dated lower left "Andreas Lopez fecit a 1795"
In this lovely, delicate oil on copper made by well-known Mexican painter, Andrés López (active 1777-1812), one sees the central figure of Christ surrounded by adoring putti (cherubs) and kneeling angels. Soft glowing light emanates from the crown and heart of Jesus, filling the space with a muted glow. Pointing almost casually at his open heart, Christ meets the gaze of the viewer with a kind face, masterfully painted by López (who was an accomplished portraitist in addition to painting religious scenes). Cascading fabric drapes around the bodies of the angels, and the rightmost angel, clad in white, sweetly crosses its hand to its chest while the other holds the host aloft.

The sacred heart of christ imagery seen in López's masterful copper was used widely in eighteenth century Mexico. While the sacred heart image developed in the Middle Ages, it was not until the 1760s that the cult gained recognition, championed by the Jesuits of Latin America. Pieces like this one are unique to time and place, and though popular in Mexico for a few decades, are still relatively rare. López revisited sacred heart imagery in his work a number of times. It is quite likely that López gained his initial inspiration from the print "Adoración del Sagrado Corazón de Jesús" (1733) by Italian printmaker Lorenzo Capponi. Prints of this variety circulated widely in the Americas, and often provided the spark of inspiration from which colonial American painters created their masterpieces. Furthermore, this painting was likely a study for López's much larger mural entitled, "Allegory of the Sacred Heart of Jesus" painted the same year at Casa de Loreto, in the Congregación del Oratorio de San Felipe Neri (sacristy) in Mexico. The imagery between the two paintings is almost the same, elucidating the meticulous painterly skills for which López was known. Two years later, López recreated the scene yet again in the visually stunning oil on copper entitled "The Sacred Heart of Jesus," (1797) currently at the Museo Nacional del Virreinato.