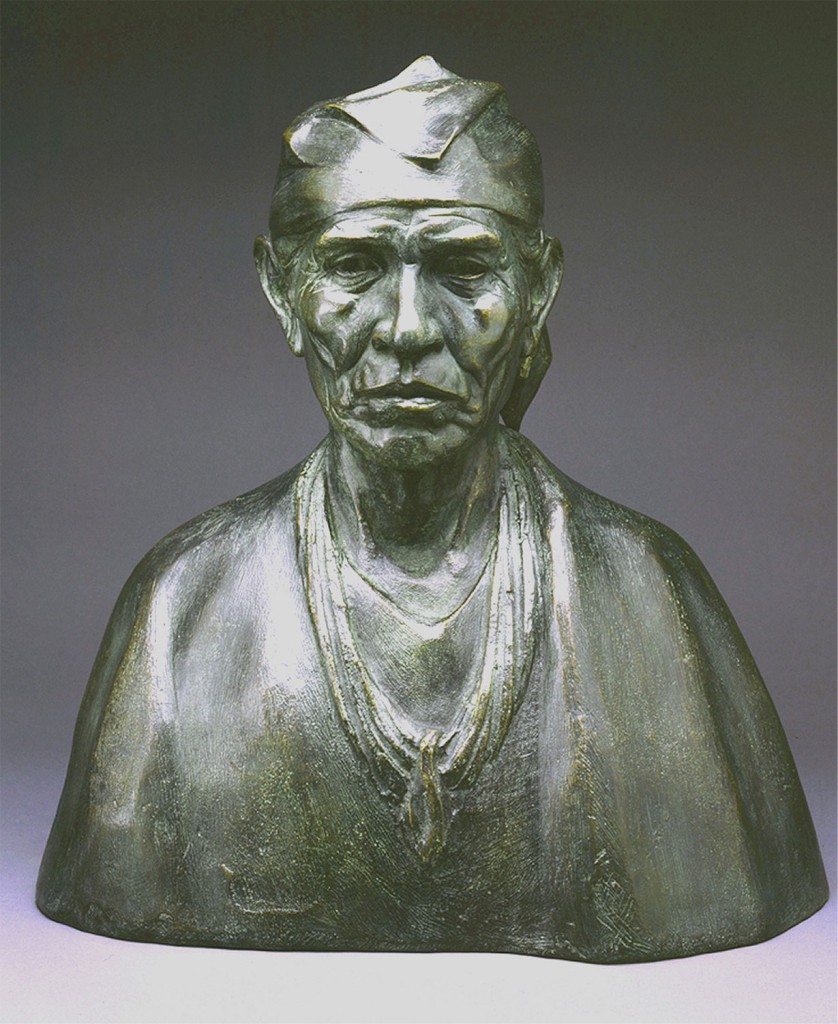 Inquire Enlarge
Hosteen Klah
22" x 20" x 12"
Sculpture, Bronze
Region: Navajo
The Museum of Navaho Ceremonial Art in Santa Fe, New Mexico (now named The Wheelwright Museum of the American Indian) was dedicated in 1937 to the memory of Hosteen Klah. Hosteen blessed the museum before it was opened to the public. It housed the textiles he wove that depicted sand paintings as well as drawings and some of his ceremonial effects.

In her book, Hosteen Klah – Navaho Medicine Man and Sand Painter (University of Oklahoma Press, 1964), Franc Johnson Newcomb describes an occasion in the summer of 1936 (pps. 202-203) when Mary Cabot Wheelwright, who funded the construction of the museum, asked Hosteen if “he would permit a sculptor to carve a life size bust of him in stone.” He reluctantly agreed.

Allan Clark, a sculptor from Santa Fe, was engaged by Mary to carve the bust. “He made his first model in clay” during a three day stay at the Newcomb Trading Post (earlier named Pesh-do-clish).

As Klah’s features became clearly recognizable in the model, his friends and on-lookers became excited. “If that image is not pounded into dust, it will take Klah’s spirit away from him and it will take his mind, then he will wander around without a mind and without a spirit and that clay image will cast an evil spell over all of us.” 1

On the morning of the third day, Clark loaded the clay bust into his station wagon and went back to Santa Fe. Arthur Newcomb took Klah to Santa Fe so the model for the final stone carving could be completed. The stone bust was completed a year later in the fall of 1937. It is said the expression captured by Clark in the model (which has much more detail than the stone bust) shows Klah was not pleased with the whole experience.

In October 1958, Vergil G. Vaughan, Auctioneer from Bayfield, Colorado, held an auction of Southwestern Indian material in Santa Fe. The clay model of Klah by Allan Clark was included. It was listed as “Estates of Mrs. Allan Clark c/o Mrs. Henrietta Harris.”

Donald J. Jenkins, a resident of Albuquerque, New Mexico at that time, bought the clay Klah bust at the auction.

The stone bust of Klah fell to the floor of the museum (probably in the 1970’s) and shattered. The fragments can not be located to this day, despite several attempts by Mr. Jenkins to find them. One unconfirmed report has the fragments removed by Dr. Bertha Dutton, a former Director of the Wheelwright Museum.

Given Hosteen’s initial reluctance to have his likeness captured in stone, and the fear of his friends and neighbors that his spirit would be forced to wander, perhaps Klah is pleased with the fate of his bust in stone.

But his likeness in clay remains.


view all works by Allan Clark