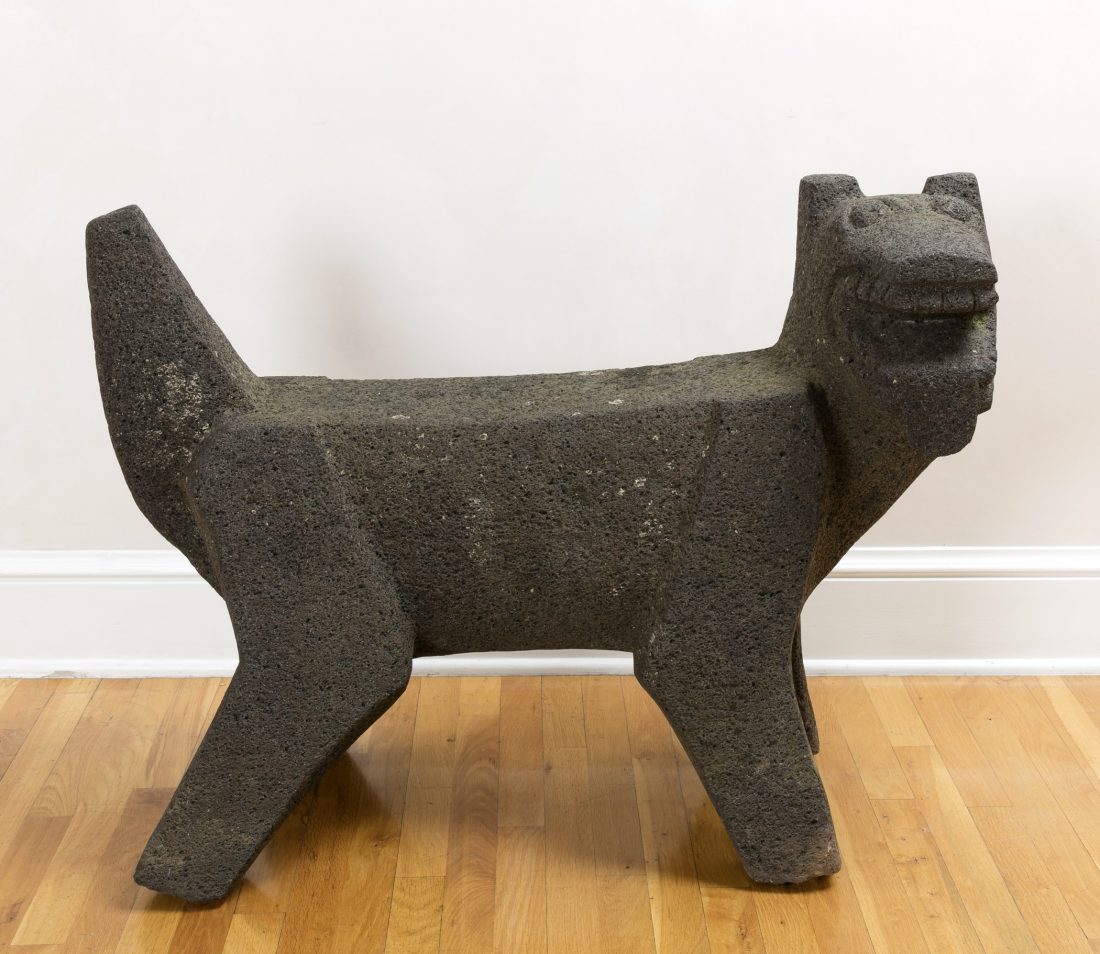 Inquire ON RESERVE"> Enlarge
Tarascan Coyote Throne ~ ON RESERVE
900-1300 CE
27" x 42" x 18"
Sculpture, Black basalt
Region: Michoacan
Culture: Tarascan Culture
Carved from a remarkable and unbroken single piece of black stone, this coyote was once the throne for a Tarascan priest. The Tarascans maintained a strong, distinct religion and culture in Western Mexico. At the center of the Tarascan State was the splendid capital city of Tzintzuntzan–“the place of the hummingbirds”–from which the kings ruled their 45,000 square mile empire and waged war against their archenemies, the Aztecs. This coyote throne represents the absolute power which Tarascan lords and religious leaders were able to wield. Carved from the incredibly dense stone known as basalt, this shaman's throne is the result of countless hours of meticulous craftsmanship and patient stonework. The coyote is especially significant in Tarascan religion, and other coyote statues have been found at Ihuatzio– an archeological site that literally translates to "the place of the Coyotes" in the language of the Tarascans. It is thought that one of the many Tarascan deities was one Uitzimángari, the anthropomorphic god with the face of a coyote and body of a man. The coyote throne would have, therefore, represented the shaman's powerful connection to this deity as the throne would literally have supported his body. This playful-looking canine is seen displaying a myriad of typical Tarascan features: a short and stocky tail, near-perfectly flat back, small upright ears, upward-facing eyes, and teeth and tongue exposed for all to see and fear. Four thick legs are bent underneath to provide support to the shaman. This particular style of coyote is indicative of work from the Patzcuaro Lake region of southern Mexico near present-day Michoacan. Similar examples have been found in the Museo Regional de Michoacan, Morelia, Michoacan, Mexico, and at the Barbier-Mueller Museum in Barcelona, Spain.