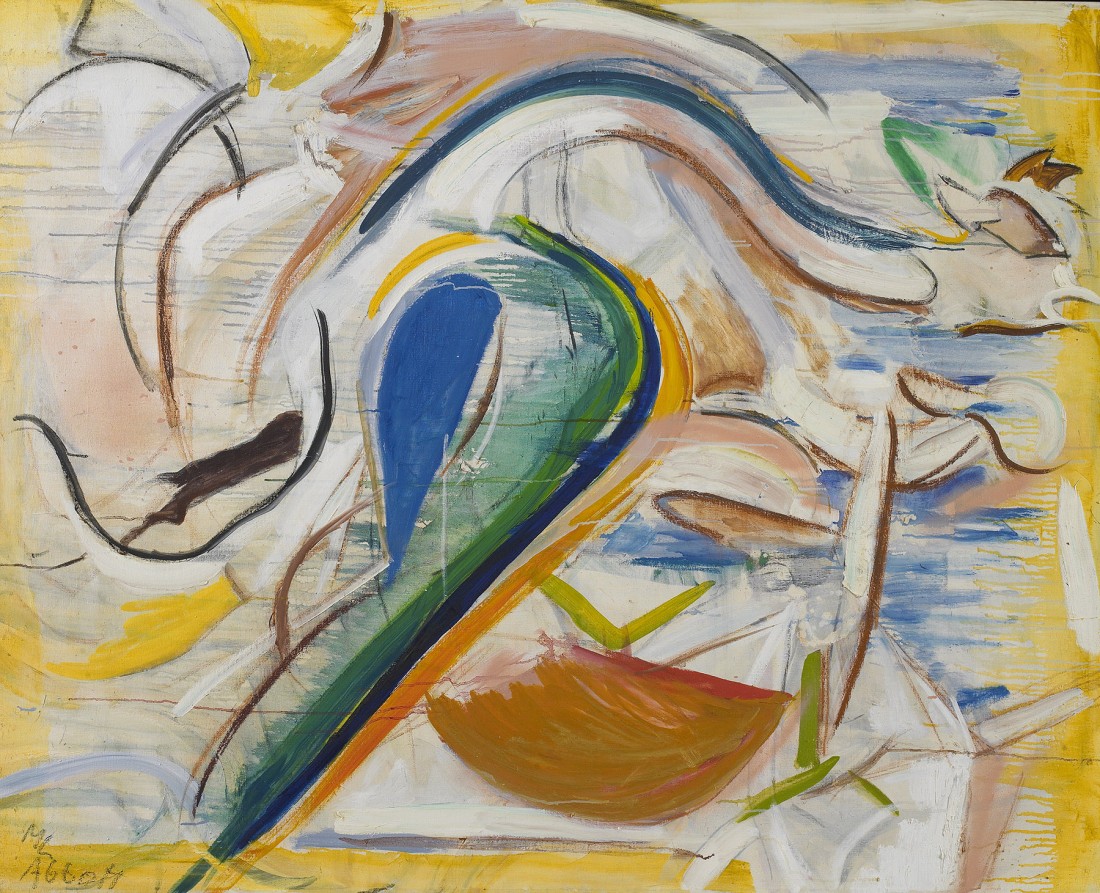 Mary Abbot
Among the early exponents of Abstract Expressionism, Mary Abbott creates powerful oil paintings in which she combines spontaneous, gestural brushwork with a highly creative use of color. Lauded for its energy and vital feeling of immediacy, her work reflects her desire to translate sensations into paint; as she puts it, “I like the process of painting. The intensity of Living Nature through myself––using the medium, paint, color and line defining the poetry of living space; that is my aim, life and work.” 1

Born in New York on 27 July 1921, Mary Abbott boasts an impressive pedigree: a descendent of such luminaries as President John Adams and General Robert E. Lee, she is the daughter of Naval Commander and military adviser Henry Abbott and his wife, Elizabeth Grinnell, a poet and writer. Abbott grew up primarily in Manhattan, where she attended Miss Chapin’s School, graduating in 1939. She also spent time in Washington, D.C., Concord, Massachusetts and Southampton, Long Island. At the age of twelve she enrolled in Saturday classes at the Art Students League of New York; by the late 1930s, she was taking advanced courses there, working under the painter George Grosz, who was impressed by her serious demeanor. Throughout this period, she also became acquainted with the work of master painters, ranging from Cimabue and Tintoretto to Eugene Delacroix, Paul Cézanne, Henri Matisse, all of whom came to influence her art. On her summer trips to the nation’s capital, Abbott also studied with Eugene Weiss at the Corcoran Museum School.

A member of the upper echelons of New York society, the stylish Abbott became a debutante at a coming out party held at the Colony Club in 1941. Shortly after, she began working as a part-time model for Vogue magazine. In 1943, she married the painter Lewis R. Teague (1917-78), after which the couple moved around the country while Teague served in the Army Air Force during the war. During this period, Abbott spent her time reading the writings of Marcel Proust, studied the work of Pablo Picasso and made paintings inspired by the example of Maurice Utrillo. Returning to New York at the end of the war, she continued modeling for Vogue and other fashion publications, such as Harper’s Bazaar and Mademoiselle.

In about 1946, Abbott left her husband and settled into a cold water flat on Tenth Street. Two years later she met the sculptor, photographer and painter David Hare who introduced her to The Subject of the Artist School, a short-lived experimental school established by Hare and other pioneering abstractionists, including Mark Rothko, Barnet Newman and Robert Motherwell. Abbott was one of the few women to attend the school, where she was deeply inspired by Newman and Rothko who, as she recalled, “taught us to draw imagination.” 2 She subsequently abandoned her interest in recognizable subject matter and the art of the School of Paris in favor of abstraction. Her concern for intuitive painting was further enhanced in 1948 or 1949, when Abbott met the Abstract Expressionist painter Willem de Kooning, with whom she enjoyed a lengthy personal and professional relationship.

In 1950, Abbott married Tom Clyde, a former investment firm manager, and settled in Southampton, where she used a rented barn for her studio. At the same time, she continued her affiliation with New York’s downtown art scene, maintaining a Manhattan studio and frequenting the Artist’s Club, whose women members included Elaine de Kooning and Perle Fine. She also fraternized with painters such as Jackson Pollock, the writer Frank O’Hara and the poet John Ashbury at nightly gathering places such as the Cedar Tavern. During the 1950s, Abbott began to make her mark in New York art circles, exhibiting her work at local commercial venues, including the legendary Stable Gallery, where she was included in the annuals of 1954, 1955 and 1957. Her paintings from this period consisted of all-over compositions composed in oil, charcoal and oil stick. In 1959, Abbott explored the Abstract Expressionist concept of unconscious expression by collaborating with the poet and critic Barbara Guest to create word pictures in which Guest would say a word and Abbott would produce a visual response.

Following her divorce from Clyde in 1966, Abbott purchased a small house in Southampton, where she continues to spend her summers. She has gone on to create paintings and drawings characterized by sweeping, energetic strokes that reveal her personal response to her environment, her inherent feeling for her medium and her use of color to create mood. From 1974 to 1977, Abbott taught at the University of Minnesota, at which time she delved further into the study of chromatics. Returning to New York, she acquired a loft on West Broadway and turned her attention to a series of flower paintings that pulsate with energy and color.

Abbott has had many solo exhibitions and she has participated in group shows in the United States and abroad, including the 2008 exhibition, The Persistence of Abstraction, held at the Pushkin State Museum of Fine Arts, Moscow. In 2011 she was the recipient of the ArtHampton Lifetime Achievement Award, a distinction bestowed on an artist who has made a significant contribution to the visual arts. She continues to divide her time between Manhattan and Southampton. Examples of Abbott's work can be found at the Avram Gallery, Southampton College, the Smithsonian American Art Museum in Washin


view all works by Mary Abbot