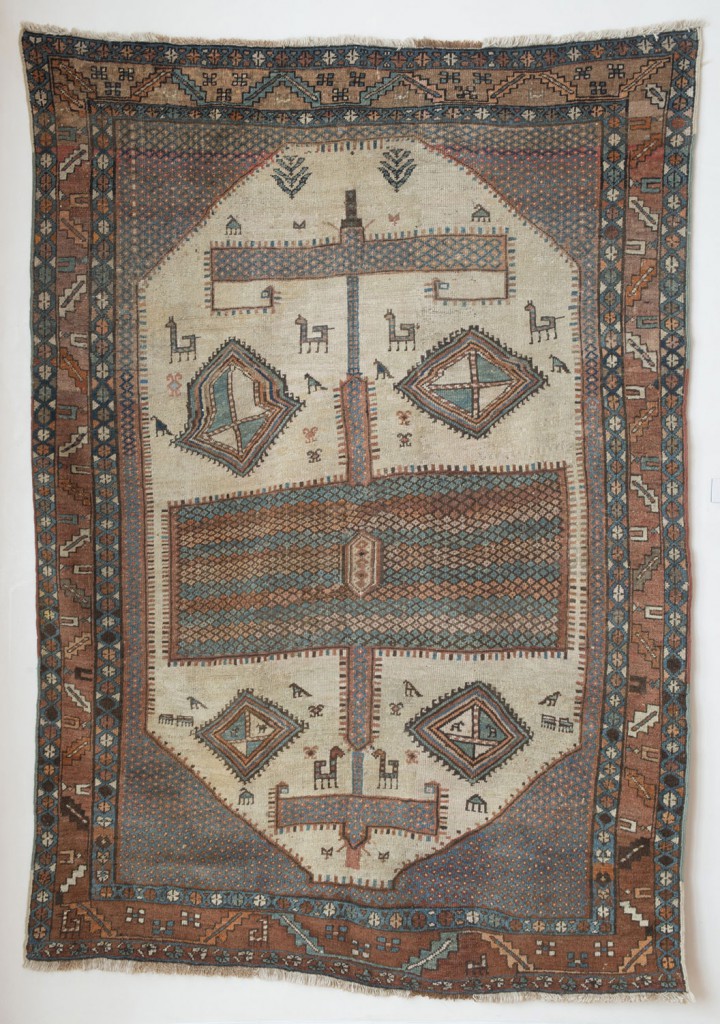 Inquire Enlarge
Bakshaish
mid-19th cent.
82" x 58"
Textile, Rugs, Wool
Region: Heriz Region, NW Iran
Among the larger oriental rugs made in Iran, Bakshaish carpets are in a class by themselves. Bakshaish rugs were produced in the area of North Iran, not far from the Caucasus, which helps to account for the qualities they share with the rugs of that region. In the 1870s-1880s, workshops devoted to the production of oriental rugs sprung up in the Heriz region; this rug’s primitive, asymmetrical design attributes, as well as its relatively modest size, strongly suggest that it was crafted outside of a workshop setting—and it was almost certainly intended for private (e.g. not commercial or trade) use.
Bakshaish carpets may utilize medallion or allover designs descended from classical Persian rugs, but they translate such models into a much more abstract and expressive idiom reminiscent of the tribal Caucasian rugs such as the Kazak rugs. Among this carpet’s many charming stylistic elements are its crudely depicted birds, camels, and floral elements, which are characteristic embellishments of this region. The rug’s boldly rendered serrated leaf and wine cup border are similarly representative of Heriz rugs. Of special interest are the bakit medallions, consisting of interwoven diamond forms and bordered with multi-colored, fringe-like phalanges. In essence, Bakshaish rugs adopt the style and feeling of the villages or tribal entities from which they originate. This rug gorgeously exemplifies the distinctive desert palette and bold graphic design of the Heriz region.