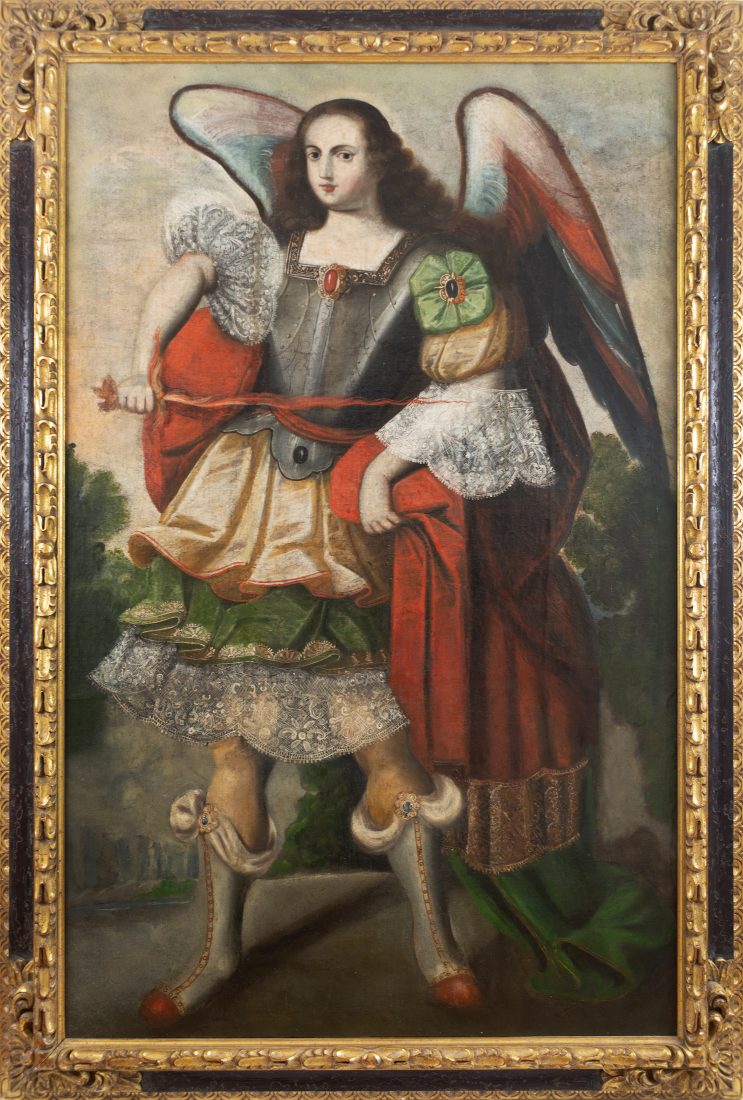 Inquire Enlarge
Archangel Uriel
c. 1675
63" x 40" Framed: 72" x 48"
Painting, Oil on canvas
Region: Cuzco, Peru
The Cusco School is one of the first artistic centers in the Americas that systematically taught European painting techniques. The arrival of the Italian painter Bernardo Bitti in 1583 marks the initial development of Cuzqueño art. This Jesuit introduced to Cusco one of the fashionable currents in Europe of then, that of Mannerism, whose main characteristics were the stylized treatment of illuminated figures. The techniques brought by Bitti and other Europeans were taught to the mestizo, Creole and indigenous artists who comprised the school. The paintings they produced were a form of religious art whose primary purpose was didactic.

The most original and important Indian painter is Diego Quispé Tito. Descended from Inca nobility, he was born in the parish of San Sebastián, near Cusco, in 1611 and active almost until end the century. It is in his work that some of the characteristics of Cuzqueña painting will be prefigured, as a certain freedom in the handling of perspective, a previously unknown role of the landscape and the abundance of birds in the leafy trees that are part of the same. The motif of the birds, especially the Amazon forest's parrot, is interpreted by some researchers as it refers to the Inca nobility.

The angel depicted here is Uriel, one of the archangels of Judaism and Christianity, including the Roman, Orthodox and Anglican churches. Uriel is often identified as a cherub and the angel of repentance, who "stands at the Gate of Eden with a fiery sword."


view all works by Circle of Diego Quispé Tito