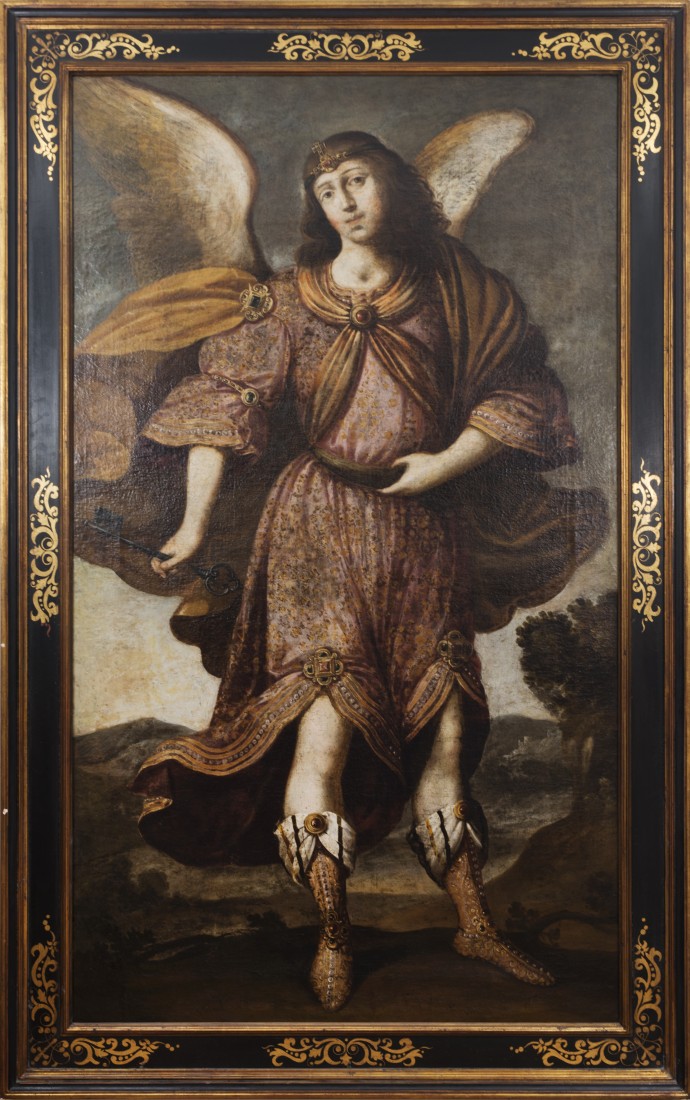 Inquire Enlarge
Archangel Raziel
ca. 1650
71.75" x 41.75" Framed: 80.75" x 50.75"
Painting, oil on canvas
Region: Seville, Spain
This angel is the the legendary author of The Book of the Angel Raziel --"wherein all celestial and earthly knowledge is set down." The Book of the Angel Raziel is reputed to contain the 1,500 keys to the mysteries of the universe. Unfortunately, they are written in a language so arcane and impossible to decipher (without presumably the aid of Raziel himself) that not even the greatest angels of heaven are able to figure it out. Raziel is also ranked as the special patron to the first human.

Raziel, called the angel of mysteries, is the possessor of a staggering amount of information on all matters secret, arcane, and mysterious; his knowledge stems from the fact that he stands at the curtain separating God from the rest of Creation and hears and notes everything that is said around His throne. He supposedly wrote it all down, and because of his pity for the plight of Adam and Eve, gave the book to Adam that he might better understand God. This did not go over well with some of the other angels, and they stole the book from Adam and threw it into the sea. God, instead of punishing Raziel, retrieved the book and returned it to Adam.The book later passed to Enoch, who would become the angel Metatron. He is also the author of the tome from which Noah learns to build the ark. This is not to be confused with Raphael, who is the angel to give Raziel's tome to Noah, but did not write it himself.

Raziel is one of the cherubim, the guardian of originality and the realm of pure ideas. He is knowledgeable in several mystical arts and can explain the truth behind many occult truths in the universe. One of the most interesting things Raziel can give you is an understanding of the energy currents in the magical universe and how to manipulate them to various ends.


view all works by Circle of Zurbaran