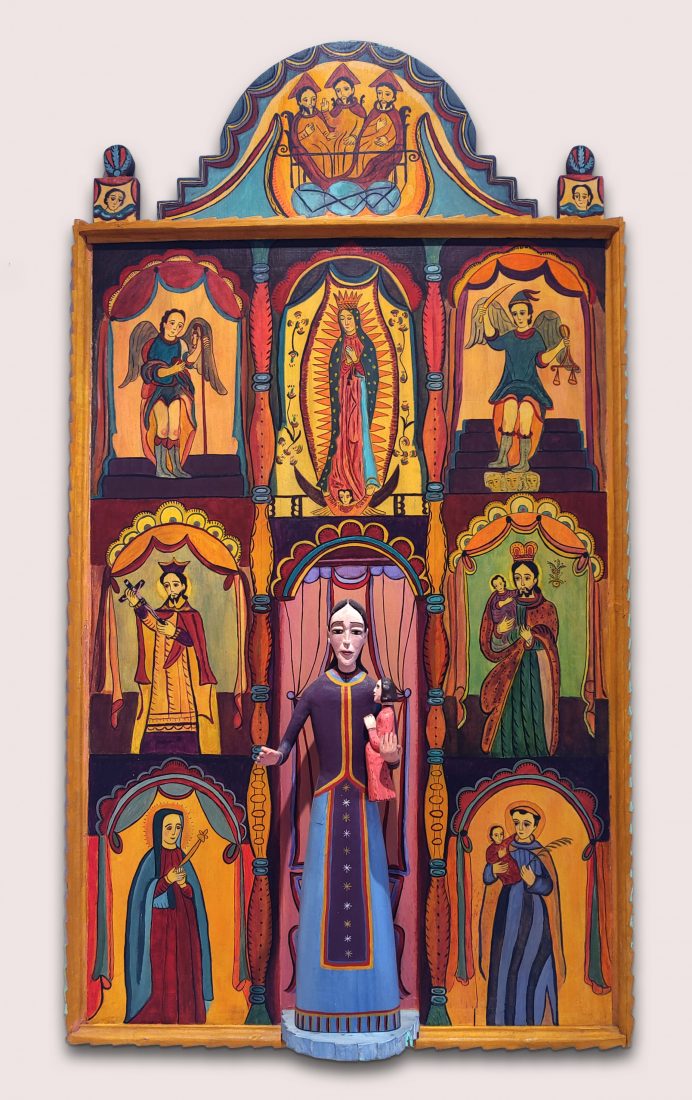 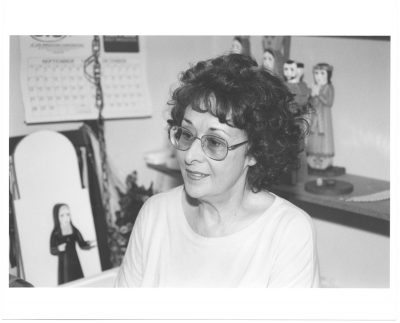 Anita Romero Jones, a native of Santa Fe, was an exceptional artist and recognized talent in the traditional arts of New Mexico.

The first of seven children of tinsmith Emilio Romero and colcha artist Senaida Romero (and the eldest sister of artist Marie Romero Cash), Jones steered clear of artistic endeavors as a young woman. Instead, she married in 1956 and raised four children while accompanying her husband to homes in California, Florida and Idaho.

After returning to Santa Fe in the early ‘70s, when she was in her 40s, she began to investigate art. Jones tried tinwork, retablo painting, colcha embroidery and hide painting before she discovered the art of carving wooden saints when the curator of the Spanish Colonial Arts Society showed her the collection of bultos in the basement of the Museum of International Folk Art. Jones once noted that because she had grown up with plaster-of-Paris saints, she “went crazy” when she first saw the Museum’s bulto collection.

Wanting to try her hand at carving, Jones brought home a piece of firewood, probably piñon or cedar, to carve. Her husband knew that would be difficult to carve, so he found her a piece of aspen. Soon, she was creating versions of St. Francis (patron saint of Santa Fe and animals), St. Agnes (patron saint of children, engaged couples and gardeners), St. Pasqual (patron saint of cooks and kitchens), St. Cayetano (patron saint of gamblers) and her favorite, the Virgin of Guadalupe. She began exhibiting at Spanish Market in 1974.

A popular and well-known “santera”, Jones participated in Spanish Market each summer from 1974 until her retirement in 2003. Creative and innovative, she was the recipient of many major awards throughout her career. She was best known for her original concept of combining tin altar screens with painted and hand carved figures and creating highly detailed and colorful wooden retablos. Her works have been featured in many books and magazines, including Arte del Espirito; Across Frontiers; The Saint Makers, and Chicana Traditions: Continuity and Change.

In 2000 she was honored by the Smithsonian Institution in Washington, DC, at their exhibit, “Santos: Substance and Soul.” Her works are in major museum and private collections, including the Museum of International Folk Art, Museum of Spanish Colonial Art, Millicent Rogers Museum, the Colorado Springs Fine Arts Center, Albuquerque Museum and others.